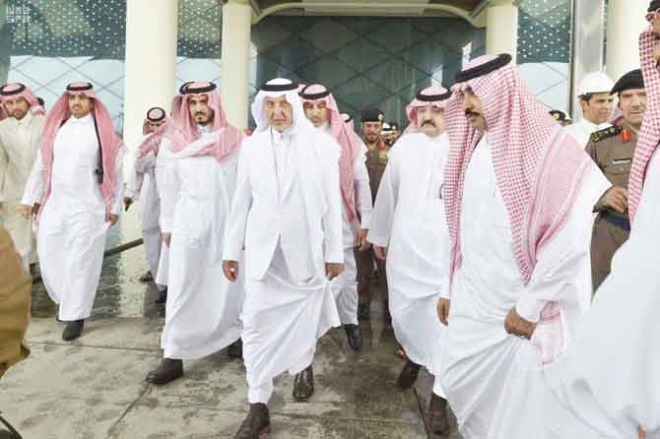 JEDDAH: Saudi civil defense chiefs began an investigation on Monday into the fire that engulfed the showpiece Haramain high-speed railway station in Jeddah.

Eleven people were injured when the blaze tore through the station in the Sulaymaniyah district on Sunday.

Makkah Gov. Prince Khalid Al-Faisal inspected the damage on a visit to the scene. He described it as a “very serious issue” and said the cause of the fire was still unknown.

“Parts of the terminal ceiling are still falling down. However, the ground and first floor were not affected. The problems are with the second floor and the ceiling,” he said.

The governor urged the media and the public not to jump to conclusions about how the fire started.

“Just wait for the results of the investigation; we will keep everyone in the loop. All committees tasked with the investigation are still in the preliminary stages of collecting information and evidence.

“Such accidents have happened in other countries, but we are hopeful that the investigation will make everything clear.

The Interior Ministry, Transport Ministry and the Makkah governorate are comprehensively looking into the  situation.]

“The results of these investigations will be submitted to the leadership for whatever directives King Salman may issue.”

The governor praised those who had “risked their lives to control the fire,” and hoped they could be rewarded.

The 11 people injured in the fire were taken to hospital. Three were treated, and eight remain under medical care.

The railway was inaugurated by King Salman on Sept. 24, 2018 and is the biggest transport project in the region.