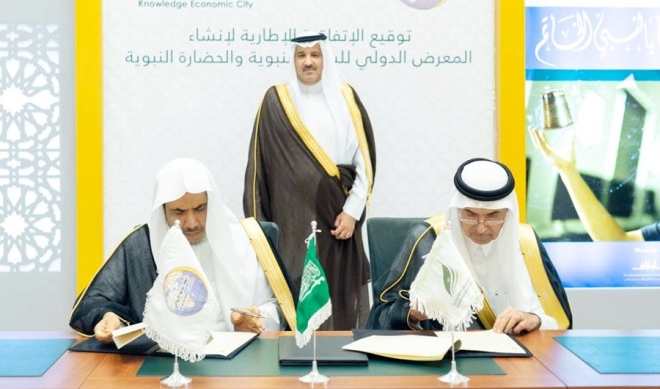 Dr. Mohammed bin Abdulkarim Al-Issa, secretary-general of the Muslim World League (MWL) and chairman of the International Organization of Muslim Scholars, has signed an agreement to allocate the site of the museum of the Prophet’s life and Islamic civilization.
Al-Issa signed the museum agreement under the patronage of Madinah Gov. Prince Faisal bin Salman.

The historic building is planned to occupy an area of 20,000 square meters in the Knowledge Economic City in Madinah. It will also be built according to the latest modern museum technologies.

Al-Issa said that the museum with its headquarters reflects its importance and merit, highlighting that Saudi Arabia is the land where Islamic civilization began.

MWL has received requests from 24 countries, including Indonesia and the UAE, to establish branches of the museum. “MWL will feature a replica of the museums at Expo 2020 in Dubai,” he added.

Al-Issa thanked Prince Faisal for giving his directives to establish the museum in Madinah and continuously following up on the project, which is in line with the support of the government to Islam and Muslims.

The project will be one of the important landmarks in the Kingdom to serve the history of the Prophet and Islamic civilization while employing the latest techniques and technologies.

The museum will house scientific and research centers, training, development and translation centers, galleries, international conference rooms and scientific seminars, and activity centers that will make it a global resource.

A memorandum of understanding (MoU) has been signed between MWL and Umm Al-Qura University, represented by Wadi Makkah Technology Company, to establish the museum, which will be located as part of the Al-Faisaliah project.

The MoU includes steps to improve cooperation between the two parties to contribute to the spreading of the Prophet’s story, educating the world about it, and presenting the true image of Islam.