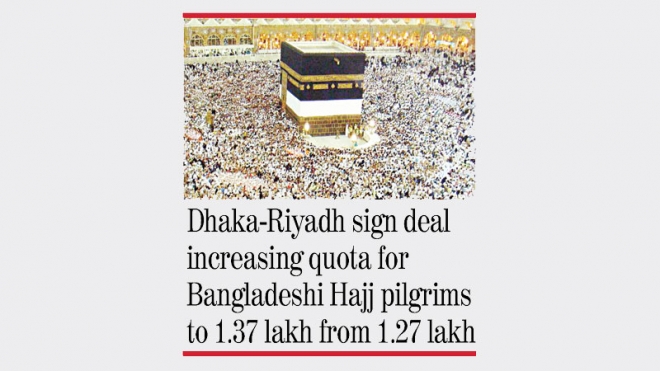 An agreement was signed between Bangladesh and Saudi Arabia on December 4 in the Kingdom of Saudi Arabia, increasing the Hajj quota to 1.37 lakh from 1.27 lakh. As per the deal, the number of direct flights from Dhaka to Medina will be increased next year to minimise the problems faced by Bangladeshi pilgrims. Biman Bangladesh Airlines and Saudi Airlines will carry the pilgrims equally to Saudi Arabia. The pilgrims will be provided with better accommodations in Mina.

ABM Amin Ullah Nuri, additional secretary (Hajj) of the religious affairs ministry, told this to The Independent yesterday. "The Saudi government has increased the 2020 quota for Bangladeshi Hajj pilgrims by 10,000. With this, a total of 1.37 lakh people from Bangladesh will get the opportunity to perform Hajj next year," Nuri said.

A total of 17-point demands had been placed before the Saudi Hajj affairs ministry during the meeting, he said, adding that the Saudi authorities assured Bangladesh of addressing all the demands. Introduction of the Dhaka route like the Makkah Route Initiative, easing of the visa process, relaxation of catering services, adequate bus services for Mina, reduction of waiting time at the Jeddah airport, air-conditioning at the Hajj terminal, and double-layer sleeping beds for Bangladeshi pilgrims were among the demands, Nuri said.

“Saudi and Biman airlines have been asked to increase dedicated flights next year. We are trying to complete the immigration process for Bangladeshi pilgrims at the Dhaka airport next year,” the additional secretary said. A total of 1.37 lakh people will perform Hajj next year. Of them, 17,000 will go under government arrangement and 120,000 under private management through various Hajj agencies, Nuri said.

He also said the Saudi government took up the project  titled ‘Vision 20130’ to reduce the hardship of pilgrims during hajj. “The Saudi authorities have informed us that they are planning to construct multi-layer buildings instead of tents. They are also thinking of installing escalators to ease the difficulties of pedestrians during hajj,” he said in reply to a query.

He further said the Saudi government was also planning to set up a metro rail service around Mina. “The catering service is mandatory. The Saudi government is likely to withdraw this system, and Bangladeshi pilgrims will enjoy a catering service of their own next year,” he added. Bangladesh also requested the Saudi authorities to collect Bangladeshi pilgrims from their places by providing adequate buses during Hajj, Nuri said. He suggested pilgrims should perform Hajj under government arrangement to avoid problems during the pilgrimage season.