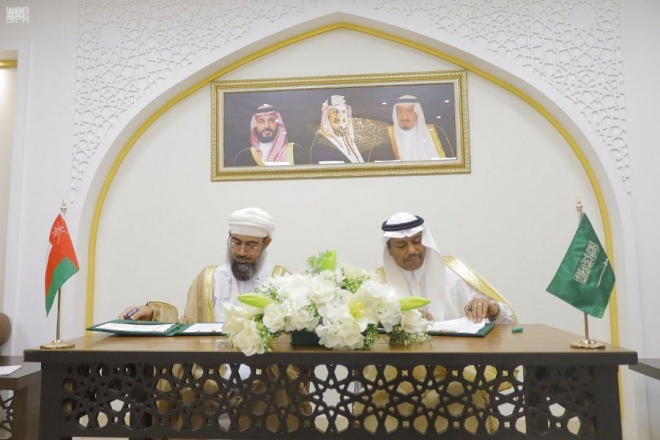 Deputy Minister of Hajj and Umrah Dr. Abdulfattah bin Sulaiman Mashat received here today Director General of Oman's General Directorate of Preaching and Guidance Sultan bin Saeed Al-Hinai and his accompanying delegation, within the context of early preparations for the this year's Hajj season 1441H to discuss and coordinate the arrangements and services to be provided for pilgrims.

During the meeting, a number of issues of common interest in the field of Hajj were discussed, including the facilities provided to pilgrims to complete their rituals easily.

Then, the two sides signed an agreement for arranging Hajj affairs for Hajj season 1441 AH. The agreement aims to organize the arrival of pilgrims coming from Oman and all their needed requirements.

The Director General expressed his thanks and appreciation to the government of the Custodian of the Two Holy Mosques King Salman bin Abdulaziz Al Saud for its efforts in providing services to pilgrims in general and Omani pilgrims in particular.