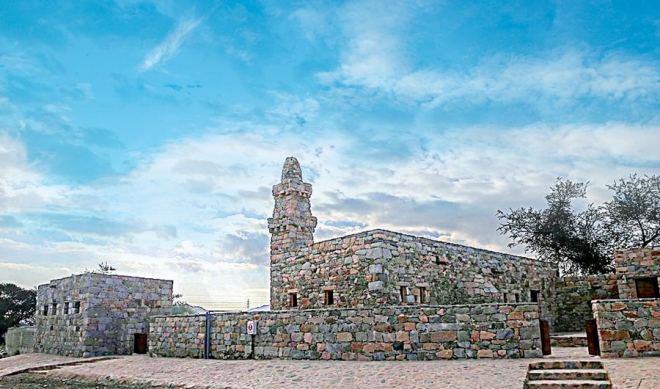 Worshippers have started returning to five Saudi historic mosques restored to their former glory after being out of use for up to six decades.

Preservation work on buildings in the Makkah and Al-Baha regions has been completed as part of phase one of the Mohammed bin Salman Project for Historical Mosques Renovation.

Under the initiative, the crown prince aims to revitalize 130 mosques throughout the Kingdom using Saudi companies that specialize in heritage buildings.

Jarir Al-Bajali and Suleiman mosques in Taif, along with Al-Malad, Al-Atawilah, and Al-Dhafir mosques in Al-Baha, are the latest to reopen their doors to worshippers after being closed to prayer gatherings for between 40 and 60 years.

One of the revamped mosques, Jarir Al-Bajali, was established in the era of the Prophet Muhammad’s companion Jarir bin Abdullah Al-Bajali and is among the oldest places of worship of its kind in Makkah region.

Covering 350 square meters, it was constructed in the Al-Sarat architectural style using irregular stones and with a ceiling made of juniper timber and concrete. It was used as a meeting place where people performed judiciary work, issued fatwas, completed marriage contracts, and resolved disputes, in addition to holding lectures and sermons. Taif’s Suleiman Mosque occupies 390 square meters and is one of the region’s most historically important landmarks. Accounts suggest that when returning from visiting his uncles in Bani Saad, the Prophet Muhammad made his companions stand on the mosque site where he said the Prophet Suleiman had camped.

The mosque became an education beacon of the region but was later abandoned and fell into a state of neglect.

Of the three mosques renovated in Al-Baha, Al-Malad can accommodate just 34 worshippers. It is located in Al-Malad village which is one of Al-Baha’s forts in its design. The village has two adjacent fortresses of architectural significance.

The only mosque in the village, Al-Malad became a cultural and educational center for local people where they learned to write, studied the Qur’an, and attended lessons and lectures. It also served as an important social meeting point for villagers.

The larger Al-Atawilah Mosque can house up to 130 worshippers and covers an area of 327 square meters. It is known for its heritage buildings, such as the forts of Al-Othman, Damas, and Al-Mashikha. One of the oldest historical buildings in the region, Al-Atawilah, also built in Al-Sarat style, was the only mosque in the town where Friday prayers were held.

Al-Dhafir Mosque occupies 245 square meters and can take 88 worshippers. It too was a center for education and a popular meeting place for people from the town and neighboring villages. The newly opened prayer buildings in Makkah and Al-Baha are among 30 mosques in 10 Saudi regions renovated at a cost of more than SR50 million ($13 million) over 423 days in phase one of the crown prince’s project.