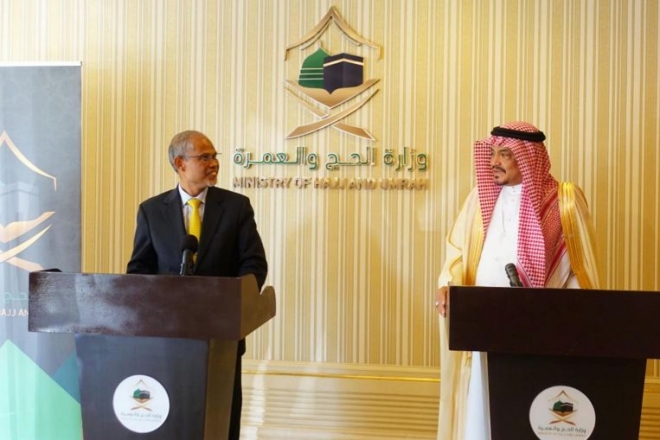 Minister-in-charge of Muslim Affairs Masagos Zulkifli has asked Saudi Arabia to allow more Singaporeans to perform the annual haj pilgrimage in the holy city of Mecca.

In a Facebook post on Monday (Jan 20), Mr Masagos said more Singaporeans want to perform the haj, and both President Halimah Yacob and Prime Minister Lee Hsien Loong have made similar requests.

Each country has a fixed quota of residents who are allowed to travel to Saudi Arabia to perform the haj. The current quota for Singaporean pilgrims, set by the Ministry of Haj and Umrah of the Kingdom of Saudi Arabia, was last increased in 2018 from 800 to 900 places.

Mr Masagos said he had asked for more haj places when he met the Saudi Minister of Haj and Umrah, Dr Mohammed Saleh Taher Benten, on Sunday (Jan 19), who conveyed his thanks to Singaporean pilgrims.

"He was impressed by their exemplary behaviour and appreciated the cooperation they gave to the authorities when performing the haj," said Mr Masagos.

The haj, one of the world's largest religious gatherings, is one of Islam's five pillars and must be undertaken by all Muslims with the means at least once in their lives.

Last year, more than two million Muslims from around the world performed the haj in Saudi Arabia.

It consists of a series of religious rites, which are completed over five days in Islam's holiest city of Mecca and its surroundings in western Saudi Arabia.

Mr Masagos, who is also the Minister for the Environment and Water Resources, is currently in Saudi Arabia for the annual Haj Ministerial Meeting.

In a separate earlier Facebook post last Saturday, he said he would also be discussing preparations and arrangements for the upcoming haj season, which will take place in August this year.