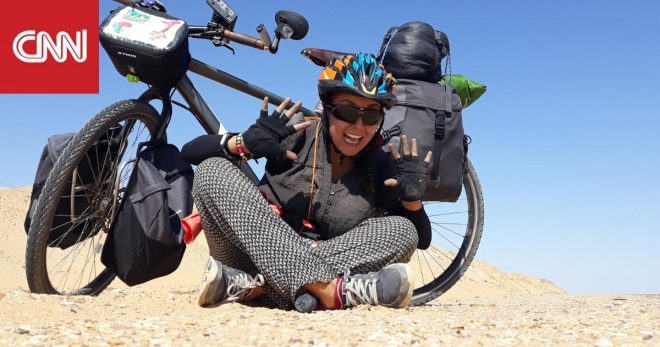 At first, Habah wanted many people from Egypt and Saudi Arabia to join her on her journey. However, she did not succeed in inviting people, as she is not expert in dealing with social media.

From Cairo, through the deserts and mountains, to Mecca .. Sarah did not stay alone, as many people were receiving her during the various journey stations, after two men, Sarah met with them on the road, published the details of her trip to Mecca, via social media.

Since this was a first-class experience, she was afraid of her bike failing in the desert, or her lack of water, in addition to her fears that she might not be allowed to reach Mecca via her bike.

And the experience was not without challenges, the most prominent of which is the reverse air and long-distance bike riding, sometimes up to 8 hours a day, or repairing her bike alone without any assistance, due to the lack of a strong communication network in the desert.

There are many stories that do not depart from a memorable memory, the simplest of which is the presentation of watermelon and dates by people she met in the middle of the road, at a time when she needed food.

After she was alone for 15 days on the road, a woman who forgot about six people could not receive her, with joy, in Port Sudan, to the point that one of them had traveled 200 km to see her.

Despite the amazement of some people on the travels of Hab, but in return she was greatly encouraged by others, shouting, “Long live, Captain!” Haba does not think about repeating the same experience, but would like to visit the stations she went through again, and to give thanks and gratitude to everyone who was supporting her.