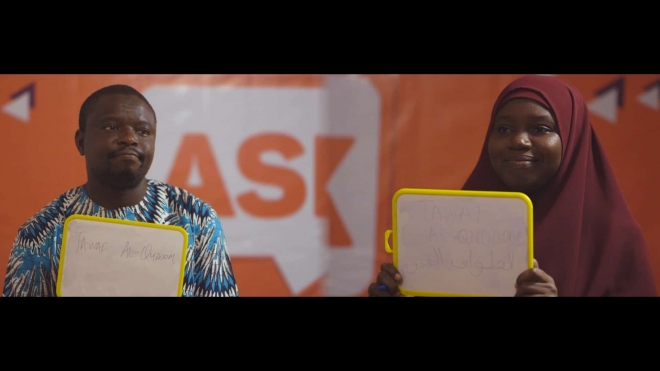 “It is a one-of-its-kind show, as there’s not a lot of content people consume that is spiritual but also entertaining. People want to go on hajj after Ramadan, so every night after finishing fasting they can watch someone play to win for hajj,” Sheriff Bakare, Founder and CEO of HalTV Africa told Salaam Gateway.

The game show is modeled on “Who Wants to Be a Millionaire?”, but instead of the general knowledge questions of the British show that went global in the late 1990s and early 2000s, participants have to answer Islam-themed questions. “There are questions related to Ramadan and general Islamic knowledge,” said Bakare.

Last year, HalTV ran a pilot project of the game show. “Two people got to go to hajj, a winner and a runner-up. This year we’re expanding it and hope to give people at least one hajj winner per night, God willing,” he said. Questions will also be asked on air for the TV audience to submit answers to win a trip for umrah or to Dubai.

The show will be in English but simultaneous translation will be offered for participants who speak Nigerian languages and dialects.

HalTV is currently seeking sponsorship from multinational companies, hajj stakeholders, and travel agencies to cover production costs and the hajj trips. “We are looking for partnerships with companies directly involved in hajj, and with hotels in Saudi Arabia and the United Arab Emirates, as Nigerians generally fly (for hajj) via Dubai,” said Bakare.

HalTV is primarily online and has programmes screened on TV channels during Ramadan.

The marketing campaign for Hajj Quest is to start in March, while by the end of March production is to commence to be ready for the beginning of Ramadan at the end of April.

If the show proves successful, HalTV, which is also a production house, would like to develop the concept for the Middle Eastern market, to be called Hajj Quest Arabia.

Nigeria, with a population of over 200 million, is around 50% Muslim, primarily in the north of the country, but Islamic-themed media content is limited and primarily concentrated around the holy month of Ramadan.

“The market is still very young. More content needs to be produced for Ramadan, and outside of Ramadan, to engage the audience,” said Bakare.

However, there are no entertainment series that run every night of the month of Ramadan, unlike in the Middle East, where millions of people tune into Syrian, Egyptian, Turkish and Gulf-produced series – musalsals – after iftar.

“Advertisers don’t have the budget for covering all content for Ramadan yet alone spending power to sponsor a fully-fledged TV series,” said Bakare.

“It is a challenge we face, boosting traffic for the rest of the year, as we have to wait for Ramadan to get some good advertising revenues for our projects.”