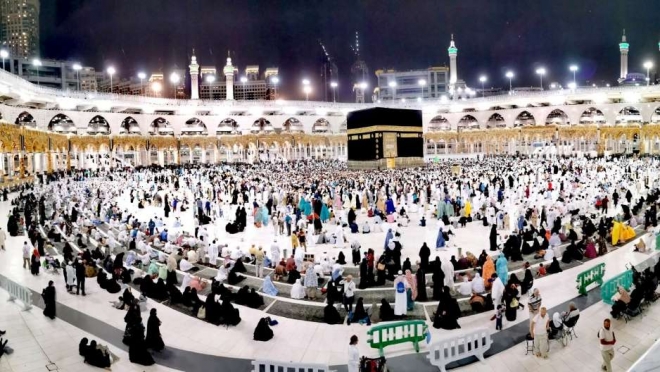 The coronavirus pandemic has caused many countries to close their borders to visitors, concurrently shutting the doors to religious sites within their lands.

Last week, many Christians around the world celebrated Easter at home, with millions tuning in to watch a livestream of Mass with Pope Francis reciting the homily to an empty St Peter’s Basilica in Vatican City.

Across the Muslim world, the closure of mosques and holy sites has resulted in many imams moving their Friday sermons online. In about 10 days’ time, Muslims will begin to mark the month of Ramadan.

The fasting month is traditionally a time for community and togetherness. It’s also a time when visitor numbers to Makkah increase as Muslims travel to Saudi Arabia to perform Umrah.

Ramadan is typically a time when millions of Muslims travel to the holy city of Makkah to visit the sacred Kaaba. Courtesy Pixabay

Makkah welcomes millions of pilgrims every year, with more than three million people visiting for Hajj, and another two million travelling there annually during Ramadan.

This year, visitor numbers will be minimal as access to Islam’s holiest city has been severely restricted. To stem the spread of Covid-19, Saudi Arabia has closed its borders to tourists and visitors, and delayed preparations for the annual Hajj pilgrimage.

Instead of boarding a plane, Muslims keen to visit Makkah this year will have to rely instead on technology. And that’s something Ehab Fares, chief executive at digital agency BSocial, is ready to help with.

Back in 2017, Fares’s company launched a virtual reality app called Experience Makkah. The app allowed users to step inside the holy city and was the first true virtual reality experience approved by Oculus, the Facebook-owned VR company, in the Middle East.

Nothing would ever replace the real experience, but we thought of sharing a glimpse of what it is like to be in the holy mosque

This Ramadan, the company is gearing up to release version 2.0 of the app, this time on Google Play, and there are plans for an iOS version to follow in Apple’s App Store.

The original version of Experience Makkah was downloaded 188,000 times. With travel restrictions in place prohibiting visitors entry to the kingdom, that number is likely to increase when the new version is released on Thursday, April 23, which is expected to be the first day of Ramadan this year.

“Nothing would ever replace the real experience, but we thought of sharing a glimpse of what it is like to be in the holy mosque,” Fares says from his office in Cairo.

Using 3D modelling, Experience Makkah allows users to immerse themselves in the holy city. Wandering the religious site, users can hear the call to prayer, stand next to the sacred Kaaba and interact with other virtual “pilgrims” who are also visiting Makkah.

“To be able to develop the dimensions and textures of the main landmarks as closely as their real-life counterparts required meticulous research and studies, so as to reach the best quality possible while avoiding any technical issues that might occur while rendering,” Fares says.

For Fares, the app offers a way to help bring the biggest religious event in the world within reach of many more Muslims. “It’s considered an educational tool that brings Muslims closer to one of Allah’s most sacred places on the planet virtually, hence resulting in more visits physically,” he says.

This year, with physical visits to Makkah forbidden, this digital window could be exactly what self-isolating Muslims around the world need.