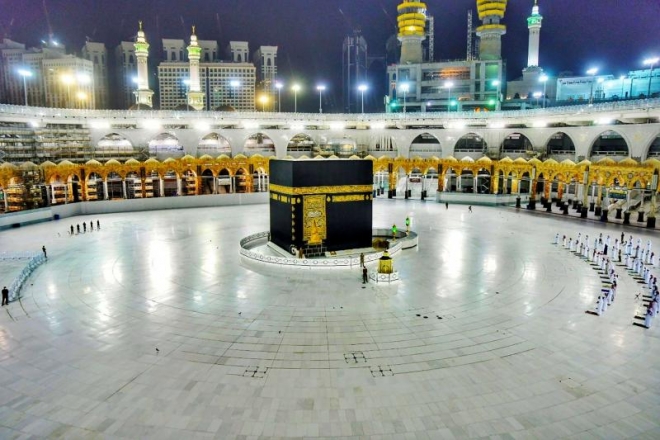 With just two months left until the start of the hajj season, Saudi authorities have yet to announce their plans for handling the annual pilgrimage, with health considerations related to the pandemic being their overriding concern.

In April, Minister of Hajj and Umrah Muhammad Saleh bin Taher Banten asked countries to be patient and wait until more is known about the state of the COVID-19 pandemic until they move forward with hajj contracts for this year

Some 2.5 million pilgrims visit the holiest sites of Islam in Mecca and Medina each year for the week-long hajj, a once-in-a-lifetime duty for every able-bodied Muslim who can afford it. Official data show hajj and the lesser, year-round umrah pilgrimage earn the kingdom about $12 billion a year.

Saudi Arabia asked Muslims to put their hajj plans on hold and suspended the umrah until further notice last March, amid measures to help curb the virus.

With strict procedures, authorities believe it may be possible to allow in up to 20% of each country’s regular quota of pilgrims, another source familiar with the matter told Reuters.

But some officials are pushing to cancel the hajj, which is expected to start in late July, the three sources said.

“Increasing the likelihood of a cancellation of this year’s Muslim pilgrimage to the holy city of Mecca scheduled for late July, Saudi Arabia re-imposed a lockdown in the Red Sea port of Jeddah, the hajj’s major gateway, after a spike in coronavirus infections. The lockdown involves a two-week, 15-hour curfew from 15:00 p.m. to 06:00 a.m.,”  said James Dorsey, a senior fellow at the S. Rajaratnam School of International Studies at Singapore’s Nanyang Technological University.

According to Dorsey, Saudi Arabia, like Singapore, South Korea and Taiwan, has a  track record of dealing with epidemics and was thus better prepared than Western nations.

“History persuaded the kingdom to ban the umrah, the lesser Muslim pilgrimage to Mecca, in late February, days before the first case of a COVID-19 infection emerged on Saudi soil,” he added.

Limiting or cancelling the hajj will put further strain on government finances that have been hit by the plunge in oil prices and the pandemic. Analysts predict a severe economic contraction this year.

The kingdom halted international passenger flights in March, and on Friday reimposed a curfew in Jeddah, where hajj flights land, after a spike in infections in the city.

Some countries have decided not to send their citizens to the hajj this year, while others are waiting for Riyadh to make a final verdict.

Indonesia, the country with the largest Muslim population in the world, decided to cancel the 2020 hajj because of the pandemic.

India said it would make a final decision after Riyadh makes its announcement. Local media reported that is unlikely its citizens will be able to participate in the religious event.

Jordanian Minister of Endowments Muhammad Al-Khalayleh, meanwhile, said the ministry is ready for the hajj season if it goes ahead, and has already rented hotels in Medina and Mecca and prepared all arrangements.

However, Amman’s official decision on the matter will not be issued until just before the start of hajj season, Khalayleh noted.

Morocco, as well, is waiting for Saudi Arabia to make an official decision on the 2020 hajj before making its own,” Moroccan Minister of Islamic Affairs Ahmed Toufiq announced May 28.

If Saudi Arabia decides to cancel the event altogether, it will not be the first time. The hajj has been cancelled more than 40 times throughout history for reasons such as health outbreaks and political turmoil.