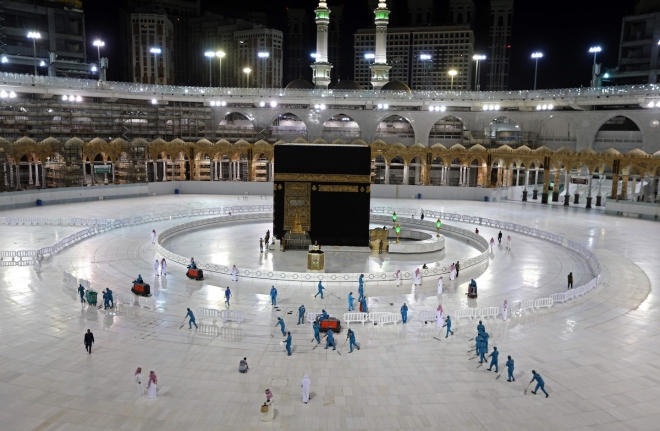 Following months of deliberation over whether to cancel the annual hajj pilgrimage to stem the spread of the novel coronavirus, Saudi Arabia announced this week that it will drastically limit the number of people involved.

In a live televised conference Tuesday, the Saudi health minister and the minister of Hajj and Umrah laid out the kingdom's plan for this year's pilgrimage, and the health precautions it will enforce to limit the spread of the virus. When asked about the number of pilgrims allowed this year, Minister of Hajj and Umrah Mohammed Saleh Benten said the issue is still under review but that the figure will not surpass 10,000.

The decision to limit the hajj — which in 2019 drew nearly 2.5 million people to the city of Mecca — will probably hit Saudi Arabia economically and deliver a blow to individuals and families who had saved up and planned to perform the pilgrimage. According to an announcement made Monday by the Ministry of Hajj and Umrah, this year’s pilgrimage will be available only to “very limited numbers” of people who are already in the kingdom but that it will include different nationalities, not just Saudis. The announcement did not explain how the pilgrims will be chosen.

On Tuesday, Health Minister Tawfiq al-Rabiah said that this year’s hajj will exclude people over 65, that all participants will be tested before they begin the pilgrimage and that their health will be checked daily. A hospital has been prepared for any emergency during the hajj. Participants will be quarantined at home afterward, the minister said.

The decision to limit the hajj, set to begin in late July, comes months after the government announced it had halted umrah, a shorter form of pilgrimage that can be taken any time of year.

The difference, however, is that the hajj is one of the five pillars of Islam and is considered a duty that every practicing, able-bodied Muslim must carry out at least once in their lifetime.

Saudi Arabia has reported more than 161,000 cases of the coronavirus, and the number of deaths has surpassed 1,300. The kingdom saw an uptick in numbers in May after it had loosened restrictions put in place to fight the virus during the holy fasting month of Ramadan. Afterward, the number of cases steadily climbed so that by June, the country was registering between 3,000 to nearly 5,000 cases a day. Mecca was under lockdown for months.

The hajj has been canceled in the past for reasons of war and disease, with the last cancellation in 1798, when Napoleon Bonaparte’s military campaign in Egypt and Syria disrupted the route to Mecca. But not since the founding of the modern kingdom of Saudi Arabia 88 years ago has the pilgrimage been so severely affected.

The cancellation of the pilgrimage is a blow to Saudi Arabia. The hajj is an integral part of the nation’s self-proclaimed identity as the leading Muslim country in the world.

Its cancellation is also the latest economic blow to the kingdom, which is suffering from low oil prices. Crown Prince Mohammed bin Salman has made it his aim since 2017 to wean the country off its reliance on oil through economic overhauls, and he has spoken of dreams and goals to transform the country into an entertainment and tourism hub.

His “Vision 2030” plan emphasizes the importance of the kingdom’s Islamic identity as the site of the two holy mosques in Medina and Mecca, and it includes efforts to expand the hajj, the backbone of the type of Islamic tourism that Saudi Arabia is seeking to promote. Saudi kings have long adopted the title of the custodian of the two holy mosques.

The kingdom announced an expansion of the mosques, a new airport in the port city of Jiddah and a new metro system to serve pilgrims. The crown prince’s plan also seeks to capitalize on pilgrims’ visits and relax the terms of their visas to allow them to go to parts of the kingdom previously closed-off for tourism.

The curtailment of the pilgrimage is also a blow to multitudes of travel companies abroad, especially in Arab countries where ads for pilgrimage packages were popping up on televisions and streets as early as March.

Muslims around the world will also be disappointed by the decision — it is common to see lines for weeks on end outside Saudi consulates as people jostle to get much-sought-after visas to perform the pilgrimage. Many save up for years to have the chance to fulfill their Islamic duty.