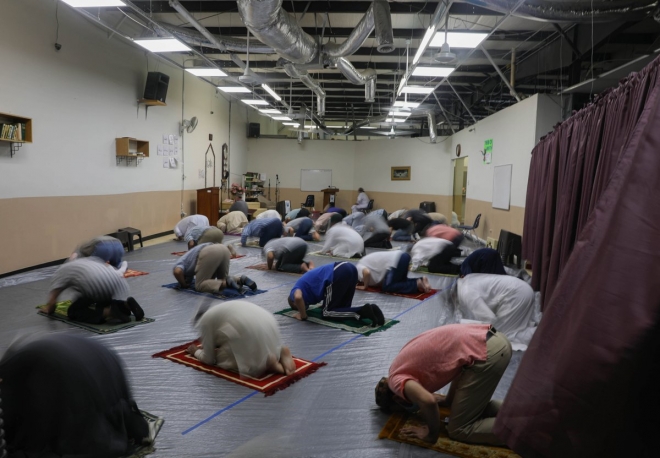 More than two million Muslims from dozens of countries were planning on flying to Saudi Arabia at the end of the month to take part in the annual Islamic pilgrimage of hajj.

But in response to the COVID-19 pandemic, the Saudi government effectively canceled the pilgrimage—grounding the dreams of dozens of Muslims in North Carolina.

“When God gives you a test or a calamity like this one, you must be patient,” says Shakil Ahmed, an imam at the Islamic Center of Cary. “We need to accept the will of God and the advice of authorities.”

Performing hajj—at least once for those physically and financially able—is one of the five intrinsic religious duties bestowed on all Muslims, known as the Five Pillars of Islam.

“It is our belief that Allah is both merciful and understanding,” Ahmed says. “While it is a once in a lifetime requirement, there are clear exceptions for people who can’t go. While most prefer to go as soon as able, Allah wants them to wait a year. If they die between now and then, God will not count it against them.”

The five-day pilgrimage culminates in Mecca, one of the holiest cities in Islam, with a visit to the Kaaba, located within the religion’s most important mosque. The Kaaba, known in Islam as the “house of God,” is the location where Muslims direct their daily prayers.

Saudi Arabia, whose king holds the title “the custodian of two holy mosques,” a reference to the holy sites in Mecca and Medina, has not canceled hajj since the foundation of the kingdom in 1932.

The time frame of hajj is determined by the Islamic calendar, which is based on the lunar year. This year it was supposed to take place from July 28 to Aug. 2. After the announcement, Saudi officials stated only around 1,000 domestic pilgrims will be allowed to perform hajj.

“If the pandemic continues or if there are other pandemics coming, I am not sure how Muslims will ritually adapt to that in this new landscape we are facing,” says Ariela Marcus-Sells, assistant professor of religious studies at Elon University, who specializes in Islamic history. “We might see a turn to localized ritual practice. This hyper focus on hajj was not always the case, historically. It always had a particular place in Muslim imaginary, but it didn’t draw the kind of the numbers that it does now.”

Hajj is so revered that a new religious status is reached by those who complete it. Muslims often add the honorific title of “al-hajj or “hajji” to their business cards. Those terms are also sometimes attached to a person's name in conversation as a sign of respect.

According to Pew Research Center, Islam is the fastest-growing major religion in the world, currently there are more than 1.8 billion Muslims worldwide—making it the second-largest religion behind Christianity.

Marcus-Sells says an analogy between hajj and the Stations of the Cross, a common Christian tradition, can be made.

“Both are a way of reliving and emotionally experiencing for oneself sacred narratives of the two religious traditions,” Marcus-Sells says.

Data from the Saudi General Authority for Statistics show that 2.49 million pilgrims took part in hajj last year. Close to 75 percent of pilgrims in 2019 came from abroad and nearly 500 of them were from the U. S.

“It is a beautiful thing to see millions of your fellow Muslims come together to worship God,” says Ibin Ahsin, a member of the Islamic Center of Cary, who completed the pilgrimage two years ago. “I felt a deep connection with all of humanity during my time at hajj, especially with my Muslim brothers and sisters.”

While most pilgrims travel in groups, Ahsin traveled independently with his wife. During hajj, however, he bumped into the contingent of Muslims from North Carolina. They were participating in the religious experience through the Islamic Association of Raleigh (IAR).

“God works in mysterious ways,” Ahsin says, with a gentle chuckle. “I was in the middle of millions of Muslims and just so happened to run into the Muslims from my own state. It’s a reminder that we are never far from home.”

Most mosques and masjids in North Carolina plan their journeys in unison or through larger associations like the IAR, which this year was offering exclusive deluxe deals ranging from $12,000 to $16,000, depending on the number of people participating.

Imam Mohamed AbuTaleb, who has completed hajj, was one of the organizers.

He says reservations to join the trip were only open for a month before the IAR decided to close it following the issuing of the statewide stay-at-home order at the end of March.

According to AbuTaleb, 15–20 people had already signed up and the IAR was on track to fill all its spots. He anticipated a total group of approximately 50 people, which would have been one of the association’s largest.

“While we must fully embrace that this pandemic is hard work, we become stronger by facing it together,” AbuTaleb says. “We never wish for times of difficulty, but perhaps the silver lining is that we can witness the beauty of people. … The beauty I have seen in these heartbreaking circumstances is people’s courage to connect and serve.”

Ahsin says the same courage being exhibited by Muslims now in the midst of the pandemic is a core tenant of hajj, and something he witnessed during every step of his pilgrimage.

“When one is taking part in hajj, you have to distance yourself from the temptations or character defects you usually fall into,” Ahsin says. “You can’t fall prey to being impatient, or getting angry. You have to exhibit the very best aspects of Islam.

“Throughout the pilgrimage you are very conscious of your fragility and your limited resources, like we are now. But in the midst of that difficulty, I saw people giving their water and food away—actively trying to help people, like we are now. All of these little aspects of beauty during such a difficult time makes you see the deep bond you have with people.”

Even though hajj is a pillar of the Islamic religion, AbuTaleb has been reassuring those in his masjid that Allah will be merciful if they are unable to go.

“No doubt this hajj season is heartbreaking for Muslims across the world, many of whom planned this journey for many years,” AbuTaleb says. “But actions are judged by their intentions. If the intent is to do good, then a person will be rewarded for that. God is all powerful, therefore this disruption is a necessary disruption.”

The ongoing COVID-19 pandemic also affected the celebrations surrounding Ramadan, another one of the Five Pillars of Islam. The holy month—celebrated this year from April 23 to May 23—is observed by Muslims worldwide as a time of fasting, prayer, reflection, and community.

“We pray to be closer to the end of the pandemic every day, but we also pray every Muslim is doing their part. We must be stewards of our local community and avoid unintentionally becoming the spreaders of this disease,” AbuTaleb says. “Even though we can’t gather in person, our hearts are becoming closer than ever before.”


⇐ Previous:
How the journey to a Covid-19 vaccine began on the Hajj
Next: ⇒
Work progresses as planned on Makkah’s Masar project