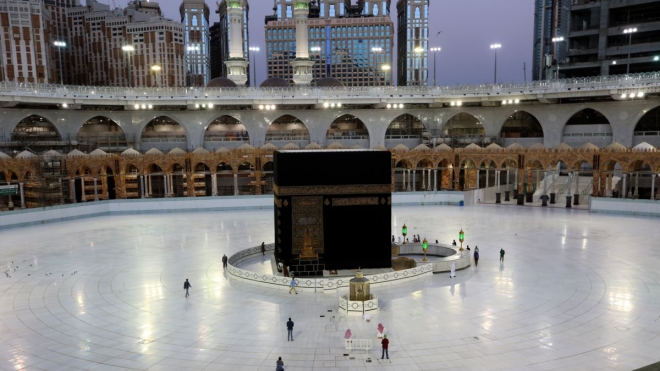 Shirin Nazirmadova, a doctor from southern Tajikistan, has been saving for years to afford the hajj pilgrimage that all able Muslims are required to make once in their lives.

But like millions of others, Nazirmadova’s dream journey of a lifetime was shattered when Saudi Arabia decided last month to bar international visitors from making the pilgrimage this year to limit the spread of the coronavirus.

Saudi authorities said that about 1,000 people -- only residents of Saudi Arabia -- will be allowed to make the annual pilgrimage this year, which begins on the evening of July 28 and ends on August 2.

Anyone taking part must be under the age of 65 and take a coronavirus test before entering pilgrimage sites in the holy Muslim cities of Mecca and Medina.

Nazirmadova, 60, told RFE/RL she will not wait for another year for the chance to visit the Islamic holy sites she hoped to see this year.

Instead, she donated the hajj money she saved to her local Farkhor district hospital to buy much-needed supplies to help battle the coronavirus.

The rural hospital used the cash to purchase personal protective equipment (PPE) for the staff, as well as medicine and antiseptics. PPE is in short supply in many underfunded Tajik hospitals across the impoverished Central Asian country of some 9.5 million people.

As an experienced doctor, Nazirmadova is on the front line of the fight against the virus.

So instead of visiting Mecca's Kaaba – the house of Allah – and throwing pebbles at the Mina pillars during the Stoning Of The Devil ritual, she will be working at the Farkhor hospital to treat people with COVID-19 and other patients.

Face coverings and gloves are expected to be added to the usual simple, white hajj dress code this year as Saudi officials try to deal with one of the highest infection rates in the world, as more than 229,000 people were registered with the coronavirus as of July 12.

A total of 2,181 in the kingdom have died from COVID-19, only behind Iran, Egypt, and Iraq for the most fatalities in the Middle East.

Social-distancing rules, temperature checks, and ample usage of disinfectants are to become part of the Saudi authorities’ existing measures to ensure health and safety.

The 1,000-strong crowd is a tiny fraction of the normal hajj, which is usually the world’s largest gathering of Muslims. Last year, some 2.5 million people attended the pilgrimage.

Due to the coronavirus crisis, Saudi Arabia has also suspended the umrah, the lesser pilgrimage that -- unlike the hajj -- can be performed at any time of the year. The country has been receiving about 7 million umrah pilgrims annually in recent years.

Under a strict quota system agreed to between Tajik and Saudi authorities, Tajiks sometimes wait five to six years for their turn to go on the hajj.

The number of the applicants significantly exceeds Tajikistan's annual quota of about 6,000 participants.

Similar long waits exist in the other Central Asian countries of Kyrgyzstan, Kazakhstan, Uzbekistan, and Turkmenistan.

In Farkhor, Nazirmadova doesn’t know if she will be able to make the pilgrimage another year.

The trip -- facilitated by the state's Religious Affairs Committee -- costs $3,700 per person. It’s a hefty amount for the Tajik village doctor, who makes around $150 a month.

Asked by RFE/RL, committee spokesman Afshin Muqim said those who had made the hajj quota in 2020 will be given a chance to make the pilgrimage next year if they want.

But the committee isn’t able to guarantee that the price -- which has to be paid in dollars -- will stay the same in 2021 or beyond.

“The price has been the same in [dollars] for the past seven to eight years,” Muqim said. “But as the Tajik national currency, the somoni, has lost its value [against the dollar in recent years], the cost of the trip went up in our currency.”

At the current exchange rates, the hajj journey costs about 38,000 somonis, while eight years ago it was around 19,000 somonis.

Salaries remain low and inflation rates are high in Tajikistan, making it unlikely that the cost of the trip will be any cheaper for ordinary Tajiks next year.

Tajikistan has its own restrictions to select candidates to make the pilgrimage. Applicants must be above the age of 40 and should be vetted by local authorities, who do background checks.

“We don’t know if the virus would go away by the time of the next hajj. Or if I would be well enough to make the journey,” says Salohiddin Mirzoev, a 56-year-old driver from the village of Khirmanak, some 15 kilometers west of the capital, Dushanbe.

Mirzoev, too, made it to the hajj list this year after registering for the quota in 2015. With a driver’s salary, Mirzoev barely makes ends meet.

“But my two sons who work in Russia pooled their money to pay for my trip to the hajj,” Mirzoev told RFE/RL. “Every Muslim dreams of making this pilgrimage. I hope I’ll make it next year.”