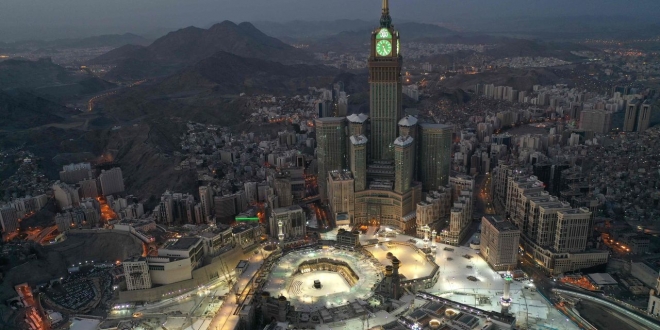 The annual hajj that brings more than 2 million pilgrims to Saudi Arabia’s Mecca has been drastically scaled back this year due to the coronavirus pandemic, but virtual software developers are hoping to let Muslims experience what it’s like to worship at the city’s holy sites from far away.

Social-distancing measures by the Saudi government to fight the new coronavirus mean only a limited number of pilgrims already in the country can participate when this year’s hajj begins July 28. The decision is a blow for those hoping to fulfill their once-in-a-lifetime obligation to perform hajj in 2020.

The annual hajj that brings more than 2 million pilgrims to Saudi Arabia’s Mecca has been drastically scaled back this year due to the coronavirus pandemic, but virtual software developers are hoping to let Muslims experience what it’s like to worship at the city’s holy sites from far away.

Social-distancing measures by the Saudi government to fight the new coronavirus mean only a limited number of pilgrims already in the country can participate when this year’s hajj begins July 28. The decision is a blow for those hoping to fulfill their once-in-a-lifetime obligation to perform hajj in 2020.

Some see the news as a boon for virtual hajj software, but some Muslims question whether holy pilgrimages can be replicated virtually.

“Unfortunately, tech acceptance in the Islamic world has been a bit slower than our ambitions, with the result that specific segments of the population are unable to see the future benefit that virtual hajj can provide,” said Mohammed Alsherebi, founder of Centillion Inc., a company that advises companies expanding in the Middle East. “By focusing only on the inconvenience of the present moment, many of us are unable to see the incredible opportunity that lies ahead of us.”

Even without the pandemic, a vast number of Muslims can’t journey to Mecca for financial or medical reasons. Virtual hajj technology would let them see inside the city for the first time, Mr. Alsherebi said.

One company, iUmrah. World, developed an app to let Muslims virtually make the Mecca pilgrimage of umrah, which can be undertaken at any time of the year, is shorter than the six-day hajj commitment and is optional for Muslims. Saudi Arabia suspended umrah in February.

The iUmrah. World app lets users find and pay for proxies in Saudi Arabia who under Islamic law can complete umrah on their behalf, said founder and Chief Executive Ahmed Alhaddad. The proxies live stream their journeys and the tasks they complete in Mecca to iUmrah customers.

“It’s an Uber-like model,” said Mr. Alhaddad. “Traditionally, if you couldn’t travel to Mecca, you would ask around your own contacts until you have someone who could go for you. We’re putting technology behind that and letting people actually see their pilgrimage being performed.”

Mr. Alhaddad said next year he hopes to release a similar product called iHajj, which would use 5G technology to live-stream throughout the hajj, an upgrade from the 4G it uses now to stream one to three hours of umrah on any given day.

The Muslim Council of Britain said it is generally accepted that a virtual hajj isn’t the same as performing hajj in person.

Ali Shihabi, an author and commentator on Middle Eastern politics and economics, said pilgrims are meant to suffer the discomfort of travel and meet other Muslims in Mecca, neither of which is possible “if you’re sitting in your living room with your Apple computer.”

The many rules linked to the ritual acts of hajj—such as wearing the prescribed clothes and not trimming nails during the pilgrimage—are as important as the journey itself, said Jonathan A. J. Wilson, a professor of brand strategy and culture at Regent’s University in London who traveled to Mecca for umrah in 2009.

“It’s a bit like a [virtual-reality] swimming experience: It could never match really swimming in the sea,” he said.

Virtual hajj technology could still have a place, Mr. Wilson said. It could provide a spiritual boost to Muslims who want to feel closer to God, and offer non-Muslims a look inside a place they aren’t allowed to enter physically, he said.

The technology also can prepare people for the real thing.

Muslim 3D, a videogame being developed in Germany by Bigitec GmbH, allows users to explore places of Muslim worship in a three-dimensional simulation and rehearse hajj as avatars while reading about the history and purpose of its rituals, among other demonstrations of faith.

“It can become very chaotic when you go to Mecca, and you don’t want to do something wrong while you’re there as your hajj might become invalid,” said Bigitec co-founder Bilal Chbib.

Labbaik VR Ltd. similarly designed a virtual-reality-based training tool for Muslim pilgrims. With no one outside Saudi Arabia traveling to perform hajj this year, however, the company has shifted its focus to a new product, WUZU, which lets people explore a 3-D re-creation of Mecca on their smartphones, said project director Adnan Maqbool.

“We don’t believe there can be a substitute to an in-person hajj experience,” said Mr. Maqbool. “However, if we can bring some measure of spiritual and emotional peace to Muslims world-wide during these tough times, then we will have met our goals.”

Mr. Alhaddad, the iUmrah. World chief executive, said he is confident that a virtual hajj or umrah will one day be considered as legitimate as the real thing. The company, which Mr. Alhaddad hopes to take public in 2022, is also developing an iVatican product.

“Yes, it’s better to go yourself,” said Mr. Alhaddad. “But can you get the same experience or fulfillment by watching a pilgrimage being performed? Yes, I believe you can.”


⇐ Previous:
‘Unprecedented’ plans in place for this year’s Hajj
Next: ⇒
Surveillance beefed up to prevent infiltration for Hajj