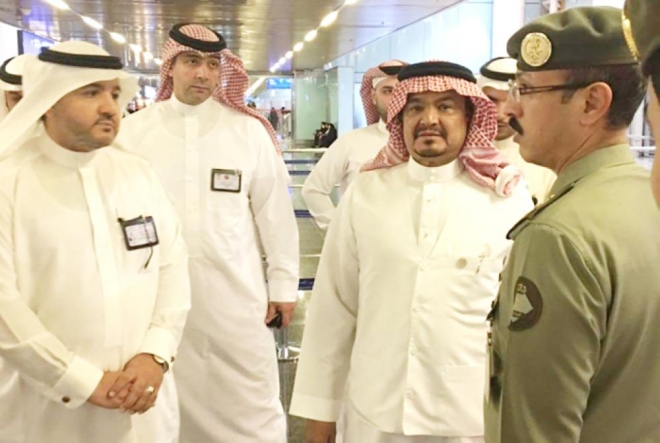 MINISTER of Interior Prince Abdul Aziz Bin Saud, who is also president of the Civil Defense Council, approved the general emergency plan for the Haj this year. Lt. Gen. Sulaiman Al-Amr, director general of the Civil Defense, said as many as 32 government departments and agencies will take part in implementing the plan, the Saudi Press Agency reported.

Al-Amr said the approval of the plan is in extension of the efforts being exerted by the government of Custodian of the Two Holy Mosques King Salman in making available everything possible to achieve the safety and security of pilgrims as well as to enable them to perform the rituals in ease and comfort.

The plan consists of five basic components aimed at addressing all emergency situations and eventualities promptly and diligently. According to Al-Amr, the plan will be implemented with the involvement of teams of young volunteers from the Civil Defense. “The plan focuses on mobilizing all the material and human resources to ensure a hassle-free Haj with ensuring safety and security of pilgrims from accidents and tragedies.

Meanwhile, Makkah Deputy Emir Prince Abdullah Bin Bandar reviewed Haj transportation plan. The major highlight of the plan is to transport around 60 million pilgrims in between the holy sites and to and fro the Grand Mosque and their places of residence in Makkah.

The deputy emir on Thursday made an inspection tour of the general secretariat of the higher authority to monitor transportation of pilgrims under the Makkah emirate and the General Car Syndicate. As many as 17,800 buses and 850 reserve buses will be used for transporting pilgrims. A transport services center with all the amenities for the staff and bus drivers has been set up at a location between Arafat and Muzdalifah.

Meanwhile, Minister of Haj and Umrah Muhammad Saleh Bantan inspected on Thursday the Haj service facilities at Prince Muhammad International Airport in Madinah. In line with a directive from Crown Prince Muhammad Bin Salman, deputy premier and minister of defense, Bantan inspected the proceedings to receive Haj pilgrims and complete their travel procedures at the airport. The minister welcomed several arriving pilgrims. Bantan also visited the station for receiving pilgrims on Hijrah Road and five Haj services offices under the National Guides Establishment in Al-Durrah District.

As of Thursday, a total of 373,081 pilgrims have arrived in Madinah, of which 159,924 have left for Makkah after spending a week in the Prophet’s City. The largest number of pilgrims who are now visiting Madinah is from Indonesia, with a total of 60,442 pilgrims.