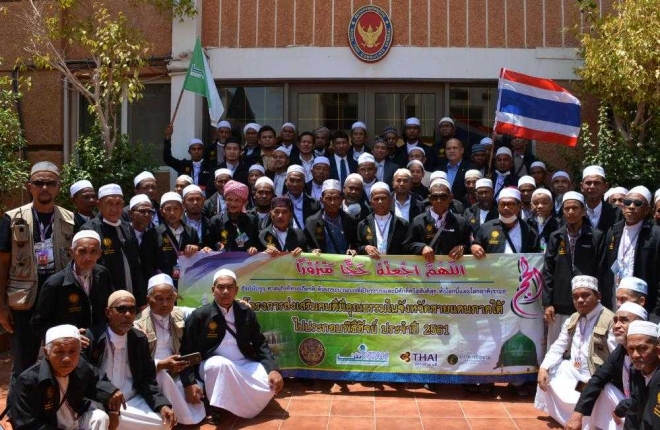 JEDDAH — Acting Thai Consul General Abdulrahim Datumada welcomed Deputy Secretary-General of the Southern Border Provinces Administrative Center (SBPAC), Kitti Surakamhaeng, and his delegation, as well as 200 Thai pilgrims who have come to perform Haj under the SBPAC’s scheme, at the Royal Thai Consulate General premises in Jeddah on Tuesday.

The deputy secretary-general has come to provide moral support to Haj pilgrims from the southern border provinces of Thailand on their religious journey, affirming that the Thai government places great importance on the development of Thai Haj affairs. He will also be leading the group of SBPAC pilgrims to perform Haj this year.

Surakamhaeng explained that each year some 200 Muslims in the southern border region of Thailand have all of their Haj expenses paid by the Royal Thai government. The candidates are selected by a committee, which receives nominations from leaders at the sub-district and village levels who identify the deserving candidates. Also taken into consideration in the selection process is helping those who have been victims of security incidents or family members of victims of such incidents in the area.

Last year, there has been a reduction in violence in the southern border region and Surakamhaeng said the developmental efforts by SBPAC along with those of the military and local community groups are largely responsible. He added: “Furthermore, people have begun to see that stability and peace lead to a better life and better economy for everyone. Dialogue and development equal peace and stability.”

Among its other responsibilities, SBPAC manages a variety of projects that aim to enhance the quality of life of those living in the southern border provinces of Thailand. These economic, social and educational projects aim to develop community identity and multiculturalism in the region.

Social projects include the responsibility for facilitating the registration, orientation, and travel of Thai Muslims to Saudi Arabia to perform Haj and Umrah. This year a total of 7,851 Thai pilgrims will perform Haj and around 70 percent of them come from the southern border region.