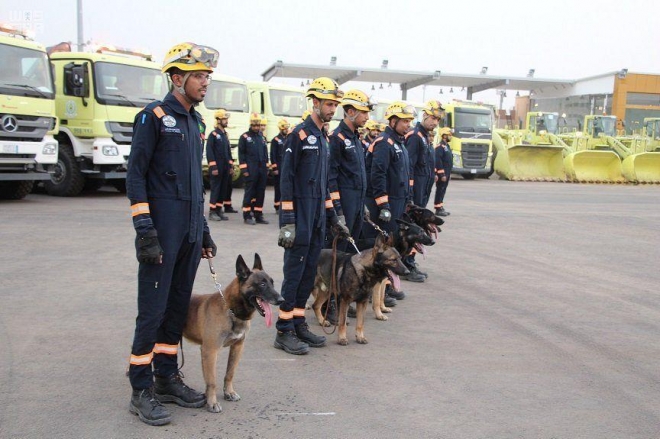 JEDDAH: Saudi Arabia’s General Directorate of Civil Defense has announced the completion of its preparations and contingency plans to ensure the preservation of the safety of pilgrims during the 2018 Hajj season in Makkah and Madinah

The preparations for the General Emergency Plan for Hajj have been personally and continuously followed-up by the Director General of the Civil Defense Sulaiman Al-Amr, reported the Saudi Press Agency on Friday.

The directorate pointed out that more than 18,000 civil defense officers and personnel have been mobilized, supported by more than 3,000 machines and sophisticated equipment, to provide the highest security level and minimize risks for worshipers at the Prophet’s Mosque.

The plan falls in line with the efforts of the government and King Salman, also the Custodian of the Two Holy Mosques, and Crown Prince Mohammed bin Salman to protect pilgrims annually, maintain their safety and facilitating their performance of rituals.

The plan includes full readiness to deal with 13 kinds of virtual risks that may occur during Hajj, which arose through in-depth studies and workshops specialized in monitoring and analyzing risks, in light of climate changes and environmental developments. The plan includes preparing detailed scenarios for dealing with each type of risk and conducting a hypothesis experiment to measure the effectiveness of confrontational plans in practice in relevant locations in the holy city.

The potential risks of Hajj vary from season to season and if construction projects are carried out for the convenience of pilgrims, as well as annual weather changes that may coincide with the Hajj season.

Therefore, the civil defense plans accommodate all these variables to monitor and analyze the expected risks, whether natural or man-made, and then take practical measures to deal with them.

Civil defense plans for Hajj this year included some foreseeable risks, whether natural, such as “high temperatures, torrential rains, hurricanes, landslides, diseases or epidemics” or industrial, such as “fires, contaminants or the dangers of mass crowds.”

The civil defense stressed the importance of training personnel on the potential risks associated with towers and tall buildings to raise their awareness in implementing evacuation plans with the assistance of special fire teams linked to these facilities.

The plan also includes working and coordinating with other concerned authorities, such as medical teams, particularly regarding previous dangerous locations or critical places around the holy city.

The authorities in the Jamarat facility have also been assigned to deal with these risks in order to participate in transporting the injured and moving them from dangerous to safe places. Then, the civil defense, along with the Saudi Red Crescent, will coordinate with the health authorities in the field hospitals and transferred to the required places.

Sixty peak evacuation points have been allocated, monitored by an officer and groups of individuals in the event of any threat to pilgrims’ safety, stampedes, or anyone who may require medical assistance.

The Civil Defense also completed preparations for crowd management and other situations by deploying a large number of officers and individuals to deal with any emergency case on all floors and entrances of the Jamarat facility and the stone throwing walls 24 hours a day, particularly during peak times.

The civil defense forces have been provided with mechanisms and equipment to facilitate rapid responses in the event of a fire, and a number of motorcycle teams have been deployed, equipped with fire and rescue devices, which have the potential to maneuver in crowded roads and sites and narrow streets.

Makkah has been divided into the civil defense plan for the Hajj pilgrimage to several axes and covered by all civil defense services, in addition to the intensification of units, field teams and teams.

Under the plan, Makkah has been divided into several axes for the Hajj pilgrimage, covering all civil defense services, in addition to intensifying units, field teams and personnel.


⇐ Previous:
1,000 Egyptians to perform Haj as King Salman’s guests
Next: ⇒
Hajj pilgrims to try out hotel rooms in a capsule for the first time this season