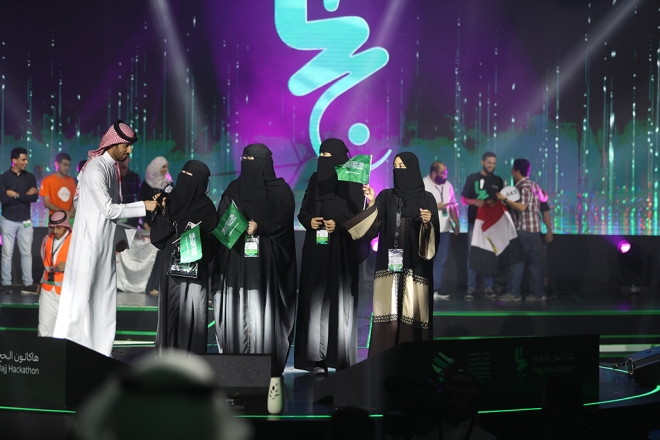 The maiden edition of theHajj Hackathonsprung up a few surprises as it turned out to be another classic case of the dark horses giving the favorites a run for their money. The record-breaking three-day event drew as many as 2950 participants from around the world, and in the process smashed the Guinness World Record for the ‘Most Participants in a Hackathon’; a record previously held by India where a hackathon had seen 2567 participants.

In what is regarded the most prominent tech event in the MENA region and now the world’s largest ever hackathon, as many as 19,000 applications were received from more than 100 countries with most of the entries coming in from such countries as the United States, Japan, Saudi Arabia, India, Pakistan, Egypt, Morocco, and Algeria. And just when we fancied the big names and usual suspects when it comes to coding and tech enterprises to carry the day, it was, in fact, the underdogs that emerged with the spoils.

The event which took place earlier this month in Jeddah, Saudi Arabia, was hosted by theSaudi Federation for Cybersecurity, Programming, and Drones, in collaboration withGoogleandRiseUp.

The Hajj Hackathon is a challenge aimed at proffering the best possible solutions to some of the biggest problems bedeviling the yearly Muslim pilgrimage. The objective of the recently-concluded challenge was to serve up digital solutions that can alleviate some of the issues that more than two million pilgrims face while doing Hajj every year.

Such aspects as transportation, accommodation, finance, and communication were identified as the key areas of focus for the participating tech teams who were looking to land the grand prize of around USD 265 K in equity funding, amongst other perks that come with the challenge, to further develop their solutions.

Having featured such notable personalities as Apple’s Co-Founder,Steve Wozniak, and Wikipedia’s Founder,Jimmy Wales, in its launch ceremony, the Hackathon was always going to cause ripples in the MENA ecosystem. With over 100 experts from around the globe providing mentorship, support and eventually serving as jury on the record-breaking challenge, there might not have been a grander stage for the participants to rise from the ashes like the Phoenix and into global reckoning, And how fitting it was that it was the ladies of ‘Tarjuman’ who beat the odds by rising to the occasion and emerging winners of the first ever Hajj Hackathon! Their solution; an app which incorporates the utilization of QR codes embedded on street signs to enable translation of these signs into the user’s native language, was adjudged to have bested other entries based on such criteria creativity, simplicity, impact, and design.

While the all-female Saudi team may have grabbed the headlines and hogged most of the attention for their unprecedented success, and deservedly so, teams from Egypt and Algeria also did the rest of the African continent proud by following closely in second and third place respectively.

The Egyptian team which was comprised of three developers were rewarded with USD 130 K (for 10% of the equity), amongst other things, as first runner-up, for their fintech solution called Hajj Wallet.

Their solution is a mobile wallet which pilgrims can utilize in making payments for different products and services during the period of their stay in Saudi Arabia for Hajj or Umrah. Money can be deposited into the mobile wallet via users’ credit cards or any of the platform’s merchant partners. Thus, by scanning a QR code, transfers can easily be made to other users, as well as payments to other vendors that are part of the network.

For finishing third, the team from Algeria were awarded around USD 100 K (for 7.5% of the equity), amongst other benefits, for their proposition called Roaa. As explained by the team’s only female member during their presentation, the product helps users share their journey with family and friends through images stored on a private network by mapping the user location.

It allows users to take pictures during Hajj which are then placed in a private network accessible to family and friends that the user has added, whilst also adding the exact location where the picture was taken. The app also incorporates facial recognition technology which allows for images of the same user taken by other people to be tagged and placed in the same network. The team aims to facilitate the documentation of the experience of pilgrims and creation of story resumes with very little expended in the way of effort, cost, and time.

The successes recorded by these North African teams is further testament to the giant strides being made to foster innovation and entrepreneurship in the region. By staying on course in the current trajectory, it is beginning to seem increasingly likely that many more potential world-beaters will be unearthed in the near future. And this would only mean progress and growth for the African startup ecosystem.