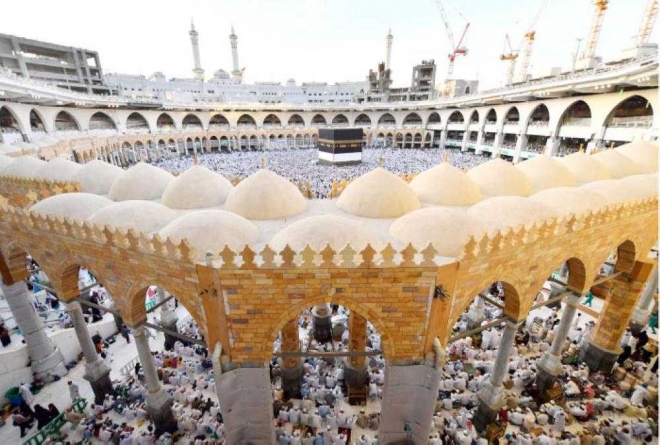 Makkah — The Grand Mosque in Makkah is overflowing with pilgrims who have come to the Kingdom from various parts of the world for the journey of a lifetime which begins on Aug. 19.

About 1.4 million pilgrims arrived till Sunday, according to the Directorate General for Passports.

Deputy Emir of Makkah Prince Abdullah Bin Bandar on Monday chaired the meeting of the Executive Committee of the Central Haj Committee to review the readiness of the holy sites to receive pilgrims.

He checked the preparedness of various sectors, the most important of which is to ensure that the holy sites are provided with sufficient quantities of water and the complete system of electricity services in all facilities.

More than 13,000 technicians, health and administrative personnel and workers have been assigned for cleaning work and supervision in addition to 7,386 cleaners in the holy sites and 5,987 cleaners in Makkah neighborhoods. They will be supported by 717 machines. The meeting also reviewed the civil defense plan for the Haj season.

President of the General Presidency for the Affairs of the Two Holy Mosques Sheikh Abdul Rahman Al-Sudais on Monday toured the Grand Mosque and its squares to review the services being provided to pilgrims.

He stressed the importance of providing the best possible services to the guests of Allah so that they can perform their rituals and worship in ease and comfort.

Six government agencies with the help of over 7,300 supervisors and follow up employees, including 160 women, have combined efforts to provide supervisory and follow up services to ensure a successful Haj season, according to the General Authority for Statistics.

The tent city of Mina, 5 km east of Makkah, is all set to receive the Guests of Allah.

Pilgrims will start arriving in Mina on Dhul Hijjah 8.

The Ministry of Haj and Umrah has started its awareness messages for pilgrims in the English, French, Russian, Chinese and Persian languages.