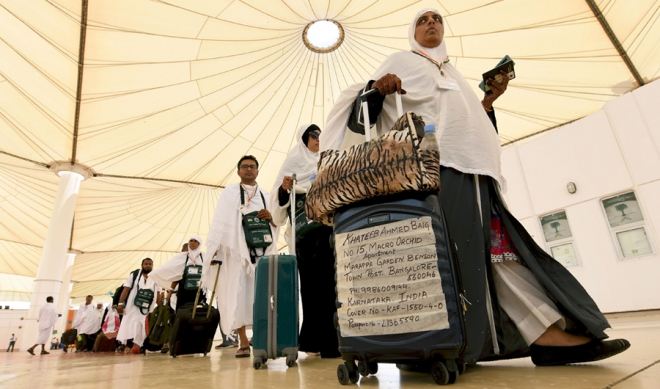 The plan aims to simplify pilgrims’ travel procedures and provide them with optimum services.

During his visit, the minister also checked preparations for receiving Hajj delegations while ensuring the provision of high-standard services. The application of technology systems and electronic programs will also help simplify procedures.

Al-Amoudi praised the Makkah Road initiative, which has been implemented in phases by the Ministry of Hajj and Umrah, in collaboration with other government bodies, to make Hajj procedures easier for pilgrims arriving from Malaysia and Indonesia.

The initiative includes issuing visas, carrying out passport and customs procedures in the two countries, verifying health requirements, sorting luggage and providing bus transport to hotels in Makkah or Madinah.

The initiative also ensures the readiness of GACA by scheduling upcoming flights arriving at the airport, which simplifies entry procedures.

Streamlining of procedures is expected to reduce pilgrims’ waiting time from three hours last year to about 45 minutes this year. Al-Amoudi said that the improvements are the result of the directives and support provided by the Saudi government to all air, sea and land ports.

“The Saudi government is keen to make every effort to simplify procedures for pilgrims and enable them to perform the Hajj and Umrah rites easily and safely through the cooperation and integration of all government and private sectors,” he said.

Pilgrims receive the utmost care from the time they arrive in Saudi Arabia until they return to their home countries, he added.

The minister thanked staff working in Hajj halls for their work and praised the integration of efforts between government bodies, especially employees of the Ministry of Interior and Ministry of Health.

He also commended the readiness of GACA’s team, highlighting their excellence in providing transport services based on the guidance of the Saudi leadership for serving pilgrims.