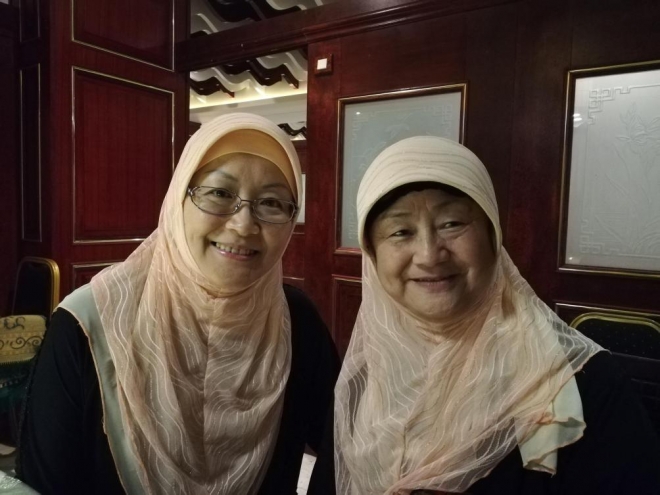 JEDDAH: The first time Asiya Yu saw the Holy Kaaba, the black, cube-like structure at the center of Makkah’s majestic Grand Mosque, she could barely hold back the tears. The 68-year-old, whose face radiates spiritualism, is one of 37 pilgrims from Taiwan performing Hajj this year.

“This is not my first time; I came here and performed Hajj 10 years ago,” she said. “I never thought I would come back to this holy land again. I consider myself lucky.

“As far as I recall it was very crowded then,” she said of her first Hajj. “The roads seemed very narrow to me; everything was congested. Now the mosque is spacious and the roads leading to it are wide and open. Everything is much more orderly and organized.”

A mother of five sons and one daughter, Asiya is from Taipei.

“My whole family was there at the airport to see me off. One of my sons lives in Myanmar; he came, too, to bid adieu to me,” she said, with pride in her sparkling eyes.

The most important day for pilgrims will be Aug. 20, the 9th day of Dul Hijjah on the Islamic calendar, when they will gather on the plains of Arafat, about 30 km from Makkah.

“On the day of Arafat, first I will seek Allah’s forgiveness,” said Asiya. “Second, I will pray for my family members and, third, I will pray for all Muslims to enjoy health and peace. I will beseech Allah to guide all believers to the right path — the path of peace.”

Hikmat Ma, another member of the Taiwanese group of pilgrims, is performing her first Hajj.

“Before I came here, I was very nervous,” she said. “I was worried about the rituals and I thought maybe I was not prepared for Hajj. I could not sleep at night, so I prayed Tahajjud (the midnight prayers) and asked for Allah’s help.

“As soon as I landed in this holy land, I felt totally relaxed and all my nervousness disappeared. I performed Umrah and it was very easy. I was worried about getting lost or forgetting how to make dua (prayers) or that maybe I would not be able to read the Qur’an properly. But everything turned out all right.”

Nevertheless, the trip to Saudi Arabia has been an emotional experience.

“When we were on the plane from Taipei, as part of the pilgrimage we were reciting the Talbiyah — Labbaik Allahumma Labbaik (O Allah, here we come at your call) — and I couldn’t control my tears,” said Hikmat.

Seeing the Holy Kaaba for the first time was also a profound and moving experience.

“I felt great,” she said. “I felt like crying but then paid attention to the circumambulation (tawaf). I felt so lucky.”

Hikmat was full praise for the efforts of Saudi authorities to prepare for pilgrims and make them feel welcome.

“I appreciate the Saudi government because they do so much and spend a lot to make everything easy and convenient for us,” she said. “Every step, from the airport to the hotel and everything, I feel I am completely taken care of. This is far beyond our expectations.”

As for her prayers at Arafat, she said: “I will ask for forgiveness and to have the best in this world and the Hereafter. I will pray for my country, my family and friends and for all believers, and also for the Saudi government. Everybody is very happy for us and my friends all requested me to pray for them in the holy places.”

An 18-day Hajj trip from Taiwan costs about 160,000 Taiwanese dollars ($6,000), which includes everything except food, said Hikmat, who retired as an immigration staffer.

Her father died 15 years ago but she still has her mother, who encouraged her to undertake the pilgrimage.

“I used to tell my mother how worried I was about the Hajj and leaving her there,” she said. “She told me not to worry, that Allah would take care of her and that performing Hajj was a blessing and I should be happy.”

Hikmat was particularly pleased to see so many women from all around the world at the Hajj.

“They have sincerity and piety,” she added. “They are very cooperative. I feel we are all one family in Allah’s house regardless of our differences. We are so touched to see all the believers come together to worship Allah.”

The 37 pilgrims from Taiwan, who are between the ages of 40 and 70, represent a big increase in numbers compared with last year, when there were only 24, said Sheng-ping Teng, a Taiwanese diplomat in Riyadh who has come to Jeddah to assist them. Teng is accompanied by his fellow diplomat Samee Chang.

The pilgrims are led by delegation chief Dawood Ma, who is no stranger to Saudi Arabia, having studied at Madinah Islamic University. He speaks Arabic and has performed Hajj several times, and so is familiar with the rituals and the challenges.

“Saudi Arabia has made a great deal of progress in terms of organization,” said Dawood. “Every year it used to take a lot of time at the airports but this year everything was done in just two hours. More than two million pilgrims are here and it is a very difficult task getting them to the right places, but we are very happy with the arrangements and the results.”