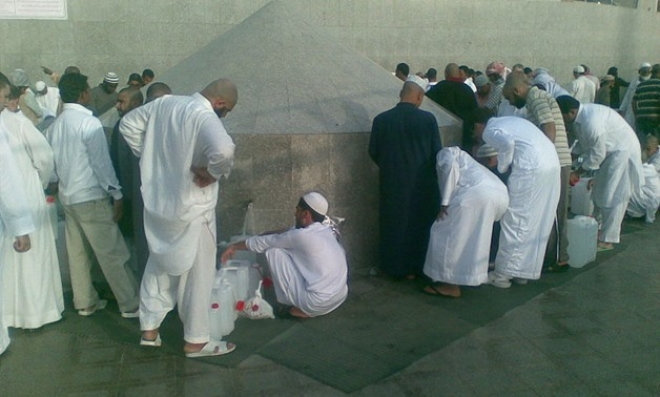 CAIRO – 16 August 2018: The water in Zamzam’s well in Mecca is not depleted because the reservoir is connected to renewable groundwater, so it won’t dry up except under specific conditions, geology professor, Abbas Sharaqi said.

“Don’t forget to pray for us and bring Zamzam water on your way back,” said every family and friend to people on their way to Hajj or Umrah. This water is considered a blessing to Muslims.

The Zamzam well dates back to the days of Ismail Ibn Ibrahim, may peace be upon them, and is located east of the Holy Kaaba, 21 meters away, by the Al-Haram Mosque courtyard.

The well miraculously gave out water when Ibrahim’s son, Ismail, was thirsty and crying in the desert with his mother, Hajar.

Historical documents indicate that the arrival of Ismail to Mecca in the year of his birth, around 1910 BC, happens to be the year when Zamzam appeared. Between today and the day Zamzam first appeared is approximately 4000 years as per the Hijri calendar. This immediately raises the question of how Zamzam water was never depleted across all those years.

As per the scientific explanation of this phenomenon, Sharaqi, a professor of geology and water resources at the African Research Institute said that, “non-depletion in geology means that it is renewable water. Ground water can be renewable, such as that in Zamzam’s well, or non-renewable.”

He added, “Egypt has the Western Desert, the Nubian Sandstone reservoir located in the oasis. However, it is non-renewable. It has not renewed itself in years."

“Zamzam's water is renewable water. The source of water comes from the rain in Mecca. Mecca is a mountainous area and so one of the valleys contains the valley of Ibrahim that holds Zamzam’s well in a low-land area,” said Sharaqi.

The professor explained that there are 14 meters of river deposits caused by rainwater on mountains that fall into the lowlands and turn into sediment. This process took millions of years to create the 14-meter well of Zamzam.

At the very bottom, there are rocks that gather causing the well to have a total depth of 35 meters, 14 meters of sediment and 21 meters inside the rocks.

With the rainfall and storage process, water is renewed. “Water in Zamzam’s well is used as the pilgrim’s drinking water and drinking water is not used at a rate like, for example, water for agriculture,” said the professor.

The geology professor expressed that Egypt has wells similar to that of Zamzam that can store and take in water, making it renewable.

“Zamzam’s well has been used for 4,000 years, this makes us think that if there will be no rain in Saudi Arabia, the water will be depleted. However, considering that climate conditions are stable and unchanging, the well can continue as it is,” he said.

This subject, although coming from Islamic background, also has scientific and logical explanations that perfectly add up to the religious stories.