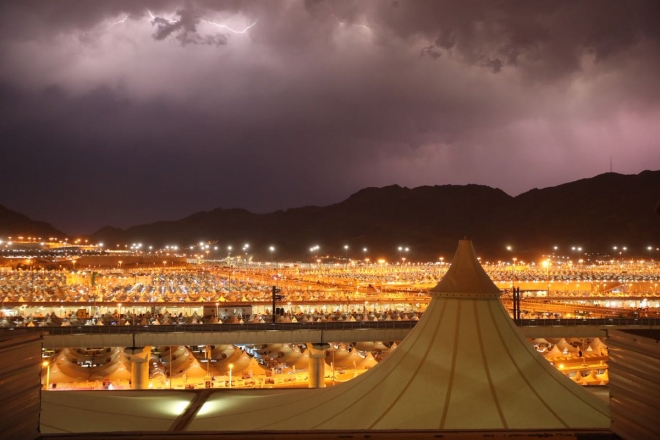 ARAFAT: Gusts of winds and heavy rain greeted some of the early pilgrims arriving in Arafat on Sunday evening.

Pilgrims who journeyed from Mina watched the night sky light up with flashes of lightning, as they prepared for a day of prayer and devotion on the Arafat plain on Monday.

The downpour started just after dusk and lasted for less than an hour with everything returning to normal shortly afterwards.

Earlier, Makkah Governor Prince Khaled Al-Faisal arrived in Mina to oversee the operation of transporting and settling the pilgrims in the white-tented city.

He thanked the Saudi leadership for their support and praise Interior minister Prince Abdulaziz bin Saud, who is chairman of the High Hajj Committee, for the successful operation.

He said: "As the storm has passed, the situation at the moment is much better. The effects are not serious, they are simple and we will fix them between 2 to 3 hours maximum.If you notice even the roads are dry. So, thankfully the situation is good in the Arafat site and the effects are very light."

When asked by Arab News if there would be any financial cost after the storm, Mashat said that there was no serious damage and there were no casualties.

Dr. Mashat confirmed that the weather would not affect pilgrims at all, telling Arab News: "In fact, as you can see, movement is smooth and the pilgrims are currently present in Mina and tomorrow they will ascend upon Mount Arafat as expected.

"They (Civil Defense) are always ready and they are present and at the moment on the holy sites of Arafat and Mina."