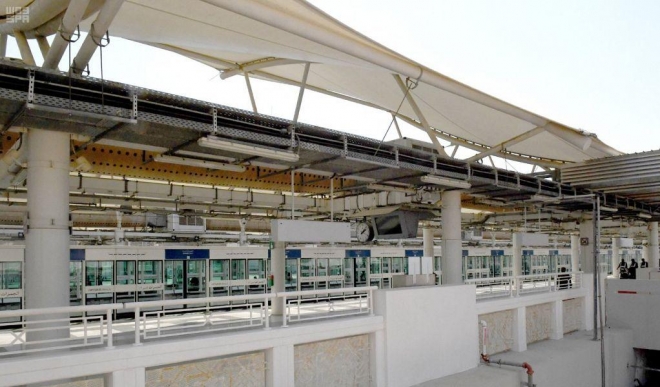 JEDDAH: The opening of the Al-Mashaaer Al-Mugaddassah Metro Project (MMMP) in 2010 introduced a new means of transport for pilgrims in the Kingdom.

The MMMP (South Line) links the southeast of Arafat and southwest of Mina through Muzdalifah. The trains pass through three stations in each of Arafat, Muzdalifah and Mina. The track stretches over roughly 20 kilometers and the driverless trains run at speeds between 80-120 kph.

The project includes nine overground stations, each with a 300-meter long platform that can be accessed by pilgrims via specific routes to the waiting areas under the stations, each of which can accommodate more than 3,000 people.

During this year’s pilgrimage season, the service is expected to transport 350,000 pilgrims over the course of seven days, running a total of over 1,000 journeys on its 17 air-conditioned trains, in which each carriage accommodates 300 pilgrims.

The project won Saudi Arabia’s Ministry of Municipal and Rural Affairs a FIDIC Centenary Award of Merit in 2013 — when it was selected as one of the top 24 engineering projects in the world from the previous 100 years by the International Federation of Consulting Engineers.

The MMMP(South Line) also won the US-based Franz Edelman Award for Achievements in Operations Research and the Management Sciences.