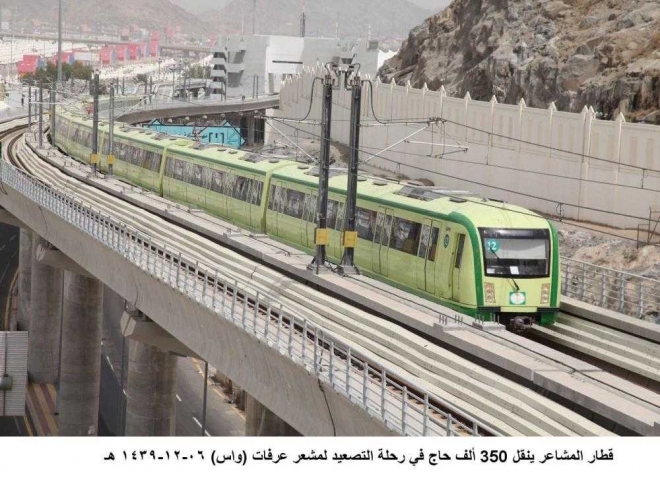 The train is one of the most vital projects that were implemented by the Kingdom in the past few years for the comfort and well being of the guests of God.

It connects the southeastern areas of Arafat with the southwest region of Mina (the Jamarat area) through Muzdalifah along a track of 20 kilometers.

The train has nine stations three in each of Mina, Arafat and Muzdalifah. The stations were built at 300 meters above the ground and are accessible though lifts, normal and electric staircases in addition to the automatic doors, which separate the embarking areas from the waiting zones.

Each waiting area can accommodate up to 3,000 pilgrims. The tickets, in form of bracelets, are sold only to the Haj companies and the tawafa establishments at SR250. They are not sold to individuals.

The train passes through three stations in Arafat, three in Muzdalifah and three others in Mina.

The train's first station lies at the entrance of Mina, the second at its middle and the third at the fourth floor of the Jamarat Bridge.

The train starts its trips from the Jamarat station, it then passes through Mina, then Muzdalifah and finally Arafat at a speed of 80-120 km an hour.

The train has no pilot but has automatic operations system, which are controlled by the operation and supervision center.