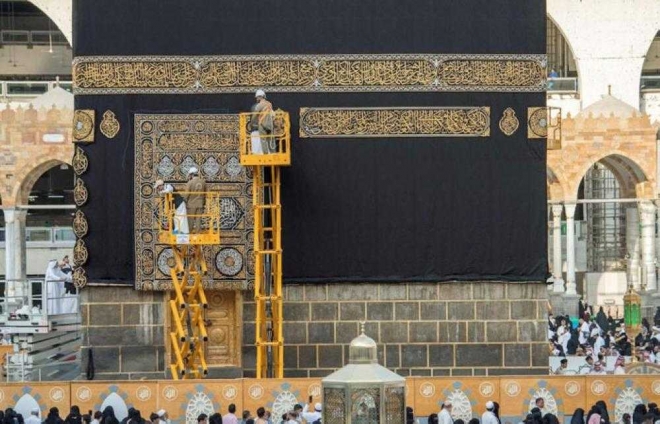 MAKKAH — The Holy Kaaba was adorned with a new cover (kiswa) on Arafat Day, Monday. Officials from the Presidency for the Affairs of the Two Holy Mosques and King Abdulaziz Kiswa Factory took part in the annual customary ceremony of changing the kiswa. The ceremony, which began after Fajr prayers, took three and a half hours to complete.

As many as 160 technical staff of the kiswa factory took part in the ceremony of replacing the cover of Islam’s Holiest Shrine. The new black cloth was placed on top of the Kaaba, at the center of the Grand Mosque, as over two million pilgrims converged on the nearby vast plains of Arafat in the climax of Haj.

In the beginning, the old kiswa was taken off and was installed with the new one, which is made of pure silk and gold threads. The kiswa, which is considered one of the most exquisite works of Islamic art, is made of five pieces. The fifth piece is the curtain of Kaaba’s door. Nearly 670 kilograms of natural silk, 120 kilos of gold and 100 kilos of silver were used to make the kiswa. Its total weight is 1,150 kilos, and 23 highly advanced machines were used in making it. The kiswa was designed and tailored by more than 200 Saudi employees at a special factory set up by the Kingdom for the purpose in Umm Al-Joud neighborhood in Makkah.

The kiswa is 14 meters high, to match the height of the Kaaba, and 47 meters wide, enough to cover the four sides of Kaaba, which are not identical in dimension. Its upper half is decorated with a 95-centimeter wide strip featuring verses from the Holy Qur’an, inscribed in gold plated silver thread.

In the past, the Kiswa used to be sent by different Muslim countries. Every year, pieces of the old Kiswa are presented as gifts to Muslim countries and senior Muslim personalities.