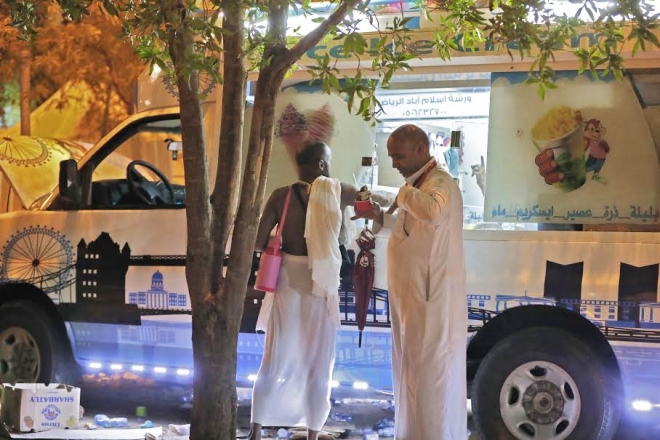 MINA: Food trucks run by Saudi men and women have begun for the first time to serve food and drinks in the holy places.

This was after Deputy Makkah Gov. Prince Abdullah bin Bandar directed the Secretariat of the Holy Capital to allow local entrepreneurs to provide their services inside the holy places during the current Hajj season.

Unlike the old fixed food stalls, about 45 food trucks have begun roaming the holy places to offer food, drinks and desserts to pilgrims. They also serve ice cream to help people cope with the heat, as well as different kinds of sandwiches.

The Secretariat of the Holy Capital confirmed that all food trucks in Arafat comply with health requirements, with every food truck manager carrying health certificates that allow them to carry out their activities.

The Secretariat highlighted that only Saudi citizens are allowed to work in these food trucks.

Afaf Abdul Aziz, one of the women serving hot drinks, said that she was pleased that the governor of Makkah had allowed women to work in the holy places.

She added: “The job is hard but truly fun. I wanted to prove that Saudi women can work in all occupations and contribute to serving pilgrims.”

She said that most of her customers were Saudis or from Arabian Gulf countries, most of whom worked in providing Hajj services.

“I have seen many Saudi women working in hospitals, health care centers, and Tawafa establishments, which makes me content,” she said.

Arif Obaid said that he worked in a food truck and served hot drinks, especially coffee, highlighting that many security men visited his truck for all kinds of coffee, especially Arabic coffee, which is in high demand. “Most of our goods go to charity work targeting pilgrims,” he said.

The Secretariat of the Holy Capital has announced accepting applications from Saudi men and women who wish to practice this activity in the holy places during the current Hajj season according to a set of standards and controls.

The most important of these is ensuring the safety of nourishments served to pilgrims and that the applicant has a health certificate proving that she/he is free of contagious or infectious diseases.


⇐ Previous:
Role of Hajj in the introduction of Saudi banknotes
Next: ⇒
800 vets to oversee slaughter of over 1m animals during Hajj