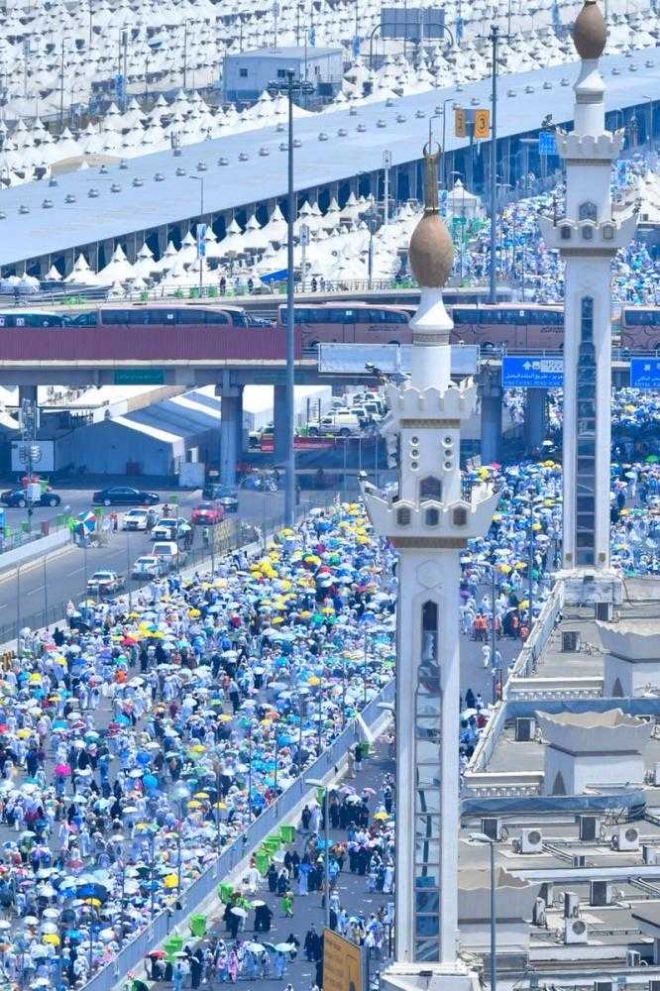 MINA — On Thursday, the second of the three Tashriq days, the pilgrims continued throwing pebbles at the three Satan replicas and a large number of them left Mina for Makkah to do Tawaf Al-Wadaa (farewell circumambulation).

According to the statistics of the Ministry of Haj and Umrah, about 70 percent of the 2.4 million pilgrims have left Mina for Makkah.

The ministry asked the six main tawafa establishments, their numerous field offices and the local Haj companies to group the pilgrims on the times that were already decided for them to avoid over crowdedness.

The pilgrims who are in hurry will stay in Mina for the first two days of Tashriq while others may stay until Friday, the third and final day, after which Mina will be a ghost city with all the tents removed.

The ministry asked the tawafa establishments to return the pilgrims back to their accommodation places in Mina and only to take them to Makkah when their schedule is due so as to observe the intake capacity of the Grand Mosque.

Commander of the Haj security forces, Gen. Khaled Bin Qarar Al-Harbe said so far there were no cases of stampede in the Jamarat area and added that the stoning of the three Satan replicas went smoothly with pilgrims throwing their pebbles and then going to their accommodation places without reversing their paths.

He said a thorough plan was formulated and implemented for the stoning of the Satan in the second Tashriq days in which the tawafa establishments and the local Haj companies participated.

"The plan took into consideration the limited intake capacity of all the levels of the Jamarat Bridge. This has helped in avoiding any cases of stampede," he said.

The ministry, on the other hand, said as many as 222,145 citizens and expatriates have registered in the e-portal of the domestic pilgrims.

Faiz Al-Barakati, director of the ministry's department for the affairs of the domestic pilgrims, said 200 people of special needs with their companions registered in the program.

He said 178 disabled pilgrims have asked for wheel chairs and assistants to push them while 438 requested the wheel chairs alone.

According to him, there were 600 pilgrims who did Haj by proxy on behalf of other people who could not come by themselves.

The ministry also said more than 190,000 astray pilgrims in Makkah, Mina, Arafat and Muzdalifah were returned to their accommodation places during the past days of the Haj.

It said about 1,260 boy Scouts collaborated with the ministry in guiding the astray pilgrims. The ministry said as many as 361 lost pieces were found and given to their owners while 11 are still to be collected.