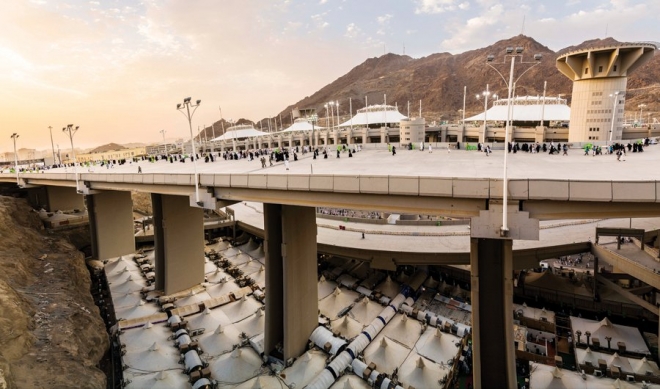 Mina is located 6 kilometers to the east of Makkah, covering a 16.8 kilometer area starting from Makkah’s city center to Muzdalifa. It is known as the Tent City, as it can accommodate more than 3 million people in more than 100,000 air-conditioned tents. It remains uninhabited for the duration of the year, except during Hajj season.

It is one of the largest projects implemented by King Salman to accommodate pilgrims in accordance with safety and security measures that allow it to absorb more than 2.6 million pilgrims annually, making it the largest tent city in the world. The tents are made of glass fabrics covered with Teflon, which is known for its high resistance to flammability and non-toxic gases; the tents are also air-conditioned and climate resistant.

Each tent is equipped with water sprayers that operate automatically as soon as their heat sensors pick up a rise in temperature, and once the sprinkles release water, alarms will sound and alert pilgrims to danger.

The valley of Mina plays an important role during the annual spiritual Hajj journey and contains the location where pilgrims perform the stoning of the devil in its valley, where the Jamarat Bridge is.

The new Jamarat Bridge project, facilitated by the government, is 950 meters long and consists of five floors with a height of 12 meters per floor. It has 12 entranceways, 12 exit roads from the four directions, emergency outlets on the basis of 300,000 pilgrims per hour, and an air-conditioning system with water sprinklers to cool the atmosphere and reduce the area’s temperature to 29 degrees Celsius.

On the fifth level, umbrellas cover the large site of the three Jamarat, to enhance the comfort of pilgrims and protect them from sun strokes.

Pilgrims perform the stoning in the hours between sunrise and sunset on the final day of Hajj, throwing seven small pebbles at three walls known as the Jamarat, beginning with the smallest (Jamarat Al-Ula) and going on to the middle (Jamarat Al-Wusta), then the largest (Jamarat Al-Aqaba).