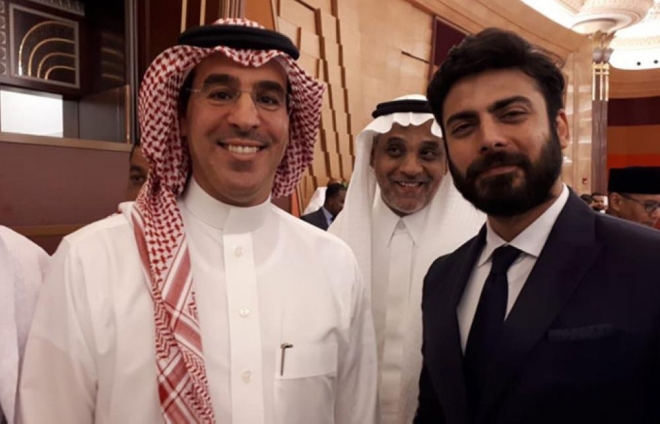 MAKKAH — Pakistani actor, model and singer Fawad Khan has performed Haj with his family. Fawad also represented Pakistan at the closing ceremony of Haj, hosted by the Ministry of Media.

In his speech at the closing ceremony, the actor said, “I’m honored to be representing 200 million Pakistanis in front of such a diverse audience and a nation that we love and highly respect.”

“This was my first experience of Haj and I am happy to share that I take back great memories of it and I am extremely impressed with the professionalism of the entire security and government’s management for the remarkable services rendered to all pilgrims,” he added.

“When this opportunity of Haj was offered to me, I was quite sure that I was not mentally and physically prepared for this journey. I had only heard about the hardships of the process and the need to prepare for it as a last trip of one life.

Being amidst large crowds of various cultural backgrounds with restrictions of language and limitations of age and abilities to bear with the challenges of heat and limited areas of movement was certainly not something I thought would be so smooth.

“I was extremely touched to see the professionalism with which this entire arrangement was done and how a massive crowd of 3 million pilgrims kept moving through the challenges by the help of the security personnel. With generous help throughout from the government and security forces the elderly and the children were well hydrated through out and the weaker ones amongst us had helped at all times,” he continued.

“With their devotion to the Muslim Ummah and the holy pilgrimage, the Custodian of the Two Holy Mosques King Salman and the Crown Prince Muhammad Bin Salman has accomplished it successfully and remarkably. I’d like to congratulate the Khadim Harmain Shareefain for a successful Haj completed by their sincere efforts and would like to wish them all the best in spreading this message of peace and love in years to come,” Fawad said in his speech.

“I’m also happy to see that the message of peace and tolerance has been a continuous agenda even with the slogan for the Haj of this year. The Kingdom has embraced the world with open arms.

“Today Saudi Arabia with Vision 2030 adopted by the Crown Prince; is leading the Muslim world while projecting Islamic moderation theme; tolerance and peaceful coexistence. The world today has huge respect and appreciation of the young Crown Prince Muhammad Bin Salman who has become the example of younger Muslim generation,” Fawad said.

“Once again I thank you very much your Excellency Dr. Awwad for your hospitality. Looking forward to see soon you in your second home Pakistan,” Fawad concluded.

Fawad was also invited to the annual Haj lunch hosted by the King Salman and the Crown Prince Muhammad. — SG