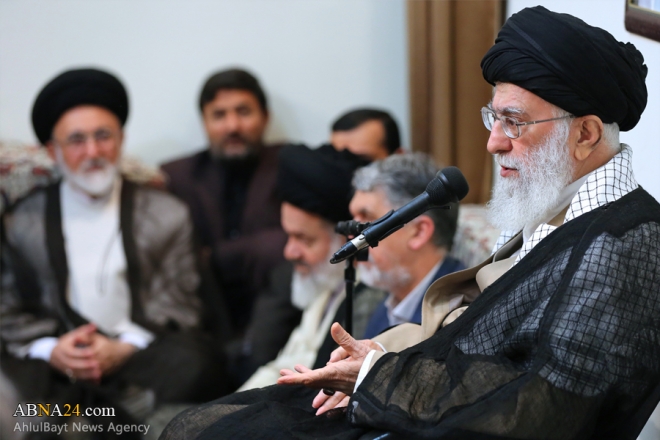 The Leader of the Islamic Revolution slammed the massive destruction of Islamic monuments attributed to the Prophet Muhammad (p.b.u.h.), Imam Ali (a.s.), the caliphs and fighters of the early years of Islam on the pretext of expanding Hajj.

AhlulBayt News Agency (ABNA): The Leader of the Islamic Revolution slammed the massive destruction of Islamic monuments attributed to the Prophet Muhammad (p.b.u.h.), Imam Ali (a.s.), the caliphs and fighters of the early years of Islam on the pretext of expanding Hajj. A group of Hajj organizers and officials met with Ayatollah Khamenei-- the Leader of the Islamic Revolution-- on Monday, October 1, 2018. In this meeting, Ayatollah Khamenei, the Supreme Leader of the Islamic Revolution, regarded the order of God, the Exalted, to gather all Muslims at a specific time and in a specific place for performing the obligatory duty of Hajj as implying some important political aspects and messages. He mentioned the necessity of developing relations and synergy among Muslims, as well as showing the Islamic Ummah’s sovereignty as examples of such political messages, and reminded his audience: “In addition to the spiritual aspect of Hajj—which is surely very important—these Islamic goals and facts should also be emphasized, planned for and put into action.” Ayatollah Khamenei pointed to other instances of Hajj’s political effects including developing relations with Muslim populations during Hajj, conveying the message of the Islamic revolution to the pilgrims and resolving any doubts or questions about it, preparing grounds for establishing or reinforcing relations between the Islamic Republic of Iran and other Islamic countries, and brotherly relations among different Muslim communities who live in the same region and asserted: “Hajj must be a case for gracing the Islamic Republic; hence, political aspects of Hajj should not be forgotten. Hajj as a ritual in following true Abrahamic traditions—that is, hajj after the Islamic Revolution—must differ from Hajj before the revolution or that of countries that have not developed a knowledge of the Islamic principles and the Islamic revolution.” Referring to the Saudi government’s making excuses and barriers in way of organizing gatherings to perform Kumayl supplication, Ayatollah Khamenei maintained: “We should surpass these barriers with hard work and innovation.” The Leader of the Revolution also slammed the massive destruction of the Islamic heritage—including sites attributed to Prophet Muhammad (p.b.u.h.), the Commander of the faithful--Imam Ali (a.s.), the Rashidun Caliphs (Rightly Guided Caliphs(, and the early followers of the Prophet—on the pretext of expanding Hajj, and said: While various countries protect their historical heritage attentively, and sometimes even create replicate historical monuments to pretend a richer history, many Islamic historical monuments have been destroyed in Mecca and Medina. Ayatollah Khamenei required the Organization of Hajj and Pilgrimage as well as related entities to carry out the task of working and finding new solutions and establishing contacts with Hajj officials in other Islamic countries in order to prevent the remaining Islamic monuments from being destroyed. Finally, the Leader of the Revolution also encouraged Hajj officials to make use of new technologies, especially the cyberspace to network with pilgrims from other countries during Hajj, and to cooperate and collaborate with them. He closed his speech by offering thanks for the efforts made by all officials involved in the organization of Hajj for this year. /257