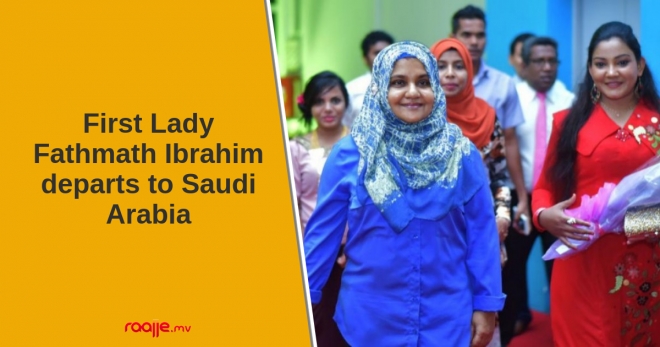 RaajjeMV understands that the first lady is headed to Jeddah, Saudi Arabia in order to perform Umrah, an Islamic pilgrimage.

First lady Fathmath and son are to travel to Jeddah through Sri Lanka. They were seen boarding flight SV788 at Velana International Airport.

RaajjeMV was unable to obtain an official comment on the trip at the time of publication.

While Fathimath Ibrahim is deemed one of the biggest influencers of the current administration, she has been the subject of multiple corruption allegations as well.

She was also one of the top frontrunners in President Abdulla Yameen’s campaign in his bid for re-election in the Presidential polls held on 23rd September, which he lost to opponent Ibrahim Mohamed Solih.

The first lady’s departure to perform Umrah comes at a time her husband, outgoing President Yameen is encouraging nation-wide protests, accusing the Elections Commissioj of Cote rigging. He was at the ruling party’s protest on day one, where he addressed those present and called on all ‘to keep protesting until they get their answers.’