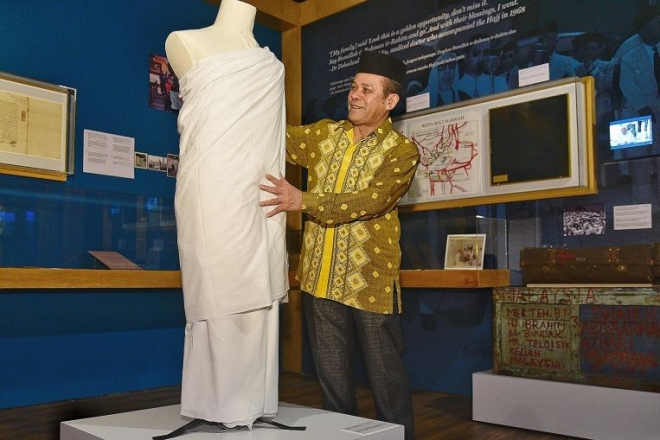 For nearly a century, thousands of Muslim pilgrims from around the region would flock to Kampong Glam before they boarded steamships to the holy city of Mecca in Saudi Arabia - more than 7,000km away.

To help travellers prepare for their haj and the 14-to 18-day steamship journey in the 1950s and 1960s, the district became a hive of activity, with services such as pilgrim brokers, boarding houses and shops selling sundry goods.

After the 1970s, cheaper air travel meant that pilgrims no longer needed to transit through Kampong Glam, but traces of this past can still be found in the area.

A new exhibition at the Malay Heritage Centre highlights Singapore's historical role as the first stop of the haj for pilgrims from the Malay Archipelago from the late 19th century to the 1970s.

Visitors to the gallery, which has more than 160 artefacts, can learn more about the millennia-long tradition through the personal accounts of pilgrims who made this spiritual journey. They include Puan Noor Aishah, the wife of Singapore's first president Yusof Ishak; and Mr Abdul Halim Mohamed Amin, the former head of haj services with the Islamic Religious Council of Singapore (Muis).

Last night, President Halimah Yacob launched the exhibition as well as the annual Malay CultureFest at the Malay Heritage Centre in Kampong Glam.

By sharing stories of the haj, our exhibition hopes to provide visitors with another layer of understanding of Singapore, and our links to neighbours in the region and the rest of the world over the larger course of history. MS SUHAILI OSMAN, the Malay Heritage Centre’s curator, on how the exhibition and festival provide a platform to share an aspect of the Malay-Muslim culture with people outside the Islamic faith.

The exhibition is titled Undangan ke Baitullah: Pilgrims' Stories from the Malay World to Makkah. It opened yesterday and will last until June 23 next year. Admission is free.

The haj is a religious obligation for Muslims who are physically and financially able to make the trip to Saudi Arabia.

Ms Suhaili Osman, the centre's curator, said the exhibition and festival provide a platform to share this aspect of the Malay-Muslim culture with people outside the Islamic faith.

"By sharing stories of the haj, our exhibition hopes to provide visitors with another layer of understanding of Singapore, and our links to neighbours in the region and the rest of the world over the larger course of history," she added.

The cultural festival will span three weekends starting from yesterday.

It will feature workshops, dance and theatre performances, including one by a contemporary dance troupe from Padang, Indonesia.

The centre's programme manager, Mr Jamal Mohamad, said: "Through various art forms such as dance and theatre, we hope that visitors can experience and enjoy the Malay community's cultural heritage across the festival."

Mr Abdul Halim, 67, who is also a consultant with Muis, has gone on the haj 33 times since 1985. He donated for the exhibition a white ihram or clothing used for the haj which he has worn since 1999.

As the former head of haj services, he travelled to Mecca to coordinate the medical and welfare services for the pilgrims from Singapore as well as ensure their safety.

"After my first haj (in 1985), I saw the needs, challenges and expectations of the pilgrims. It gave me satisfaction in helping the local pilgrims, so I volunteered until I joined Muis as a permanent staff member in 1996," he said.