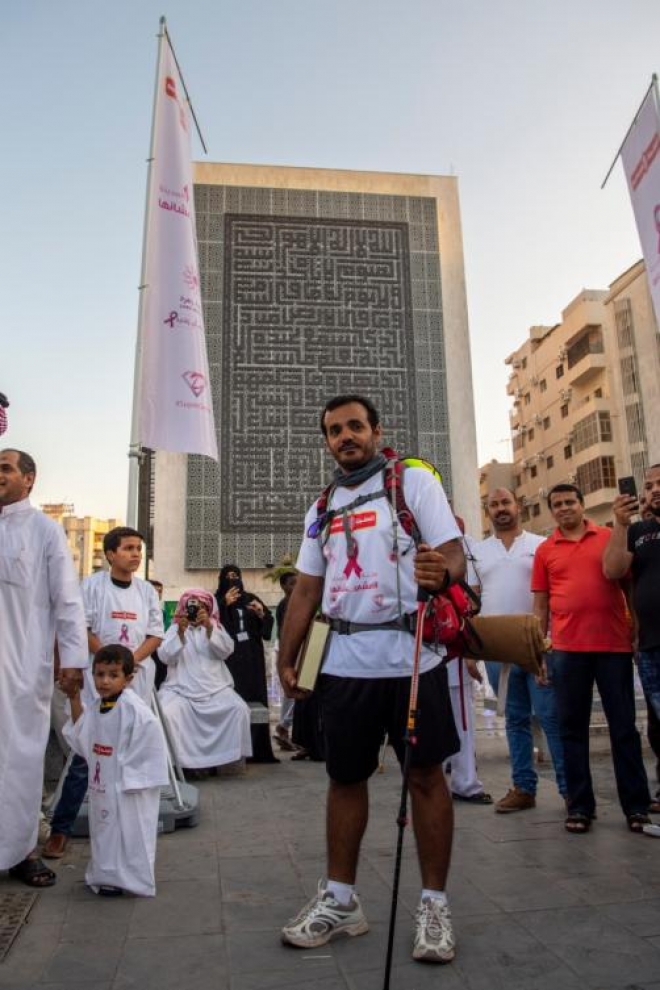 JEDDAH: Saudi traveler Yasser Alhmeid has successfully reached Al- Madinah on foot following a bumpy 455km journey that started from Makkah. Yasser’s milestone falls in line with the month of October’s breast awareness campaign and Sunbulah’s Walk for Her #امشي_عشانها initiative held in partnership with Zahra Breast Cancer Association. The objective of the campaign aims to spread positivity, next to encouraging women to get early detection and look after their wellbeing.

The long 12-day trek began in Makkah and then the City of Asfan where he was welcomed by a crowd of attendees who lauded his favorable efforts. He then continued his path on the Hijra Road before finally arriving in Al- Madinah after a daily 30 – 40km walking distance wearing Sunbulah’s Walk for Her #امشي_عشانها logo to instill hope and stress on the need for early detection of breast cancer.

Alhmeid received a warm and festive welcome in Al- Madinah as attendees expressed their gratitude and appreciation for his valuable and generous deed towards a good cause. Samer Ibrahim Kurdi Chairman of the Board at Sunbulah Group was also present at the receiving end of the journey standing and applauding amid supporters of the campaign.

Commenting on the initiative, Samer Kurdi said: “We are grateful for Zahra Breast Cancer Association’s vital role in spreading positivity and awareness and second Alhmeid’s message all throughout this challenging journey. We also thank all attendees for being present and showing support. Breast cancer awareness demands meticulous and hands-on participation from the public and private entities in health, education and the media. It requires joint efforts to introduce and translate preventive steps to the public by enticing women to take on early detection measures for a healthier and happier life.”