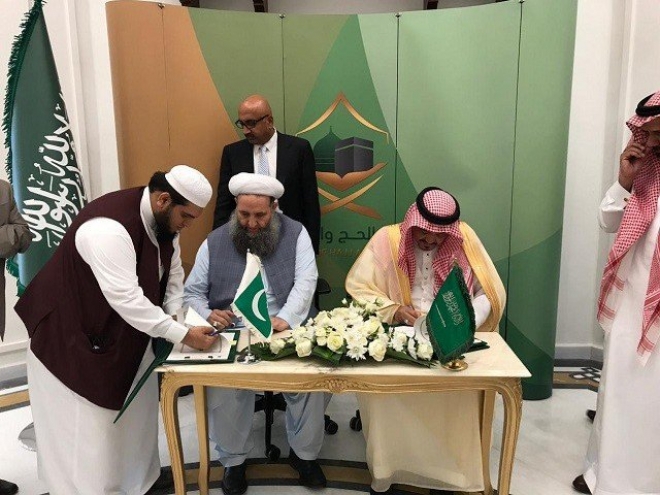 ISLAMABAD: Pakistan and Saudi Arabia on Sunday signed an agreement regarding terms and conditions and information regarding the holy pilgrimage of Hajj in 2019.

According to the agreement, signed by religious affairs ministers of the two countries, a record 184,210 Pakistani Muslims will perform their religious obligation next year. The Saudi government has increased the quota for Pakistan with 5,000 pilgrims under the Road to Makkah project.

35,000 pilgrims from Sindh province will be benefitted in the first phase of the scheme, whose verification and immigration will take place at Karachi airport.

A spokesperson of the religious affairs ministry told The Express Tribune that the Pakistani pilgrims will be issued e-visas according to the agreement. The Pakistani delegation will be led by Federal Minister for Religious Affairs Pir Noorul Haq Qadri.

‘Arrangements for Hajj pilgrims under way’

Meanwhile, the matter of waiving off 2,000 riyal Umrah tax will be decided after consultation with the chief custodian of the Two Holy Mosques, said the Saudi officials, adding that an increase in Pakistan’s Hajj quota in accordance with the new national census will also be considered soon.

They assured that efforts will be made to host all Pakistani pilgrims in Mina city.

The Ministry of Religious Affairs has already started making residential and transport arrangements for the Hajj pilgrims and asked Saudi companies to submit their offers in this regard.

According to the conditions set by the ministry, the middlemen cannot offer tenders for the provision of residence, transport and food for the pilgrims. The model of the vehicles should be between 2015 and 2019, while the residential buildings should have at least two lifts, internet and Wi-Fi service.