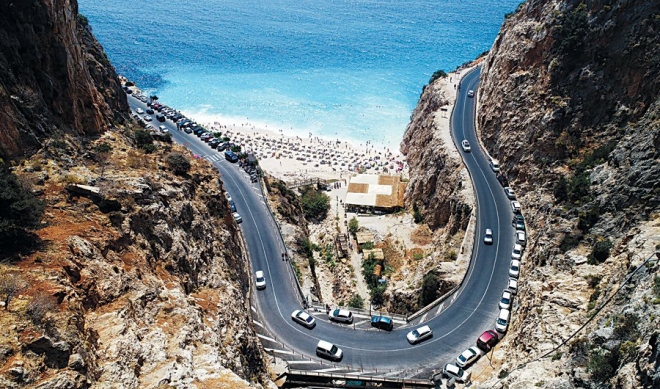 DUBAI: As Saudi Arabia gets ready to open its doors to tourists from around the world, its own citizens are expected to take their travels to the next level in coming years.

With travel bookings in the Kingdom considered the largest in the Middle East and North Africa (MENA) — worth more than $25 billion each year — the power of the Saudi traveller shows no sign of slowing down.

“Based on our insights and data from this year, we foresee that in 2019, some of the travel trends for Saudi consumers will be increased duration of stay, continued momentum and growth around religious tourism, and more interest in resort-based destinations,” said Muzzammil Ahussain, executive vice president of Almosafer, a Saudi online travel platform.

“In 2018, we found that travellers opted for longer vacations, with the average length of stay increasing by 20 percent compared with 2017.”

Religious tourism is a growing travel sector in the Kingdom, with the platform’s hotel bookings for Makkah and Madinah increasing by 92 percent in 2018 versus 2017.

The platform also had a rise in bookings for resort destinations such as Bali, Sharm El-Sheikh and Orlando.

“Within the Middle East, the top destinations for Saudi travellers include Dubai, Cairo, Manama and Sharm El-Sheikh, but we can also see that they are increasingly opting to travel further abroad, with destinations such as Kuala Lumpur, Colombo and Tbilisi on the rise,” Ahussain said.

“London definitely remains a top destination for Saudi travellers, as we saw a 143 percent increase in visits to London from January to November 2018 compared with the same period the previous year.”

Saudi tourists are also seen as a key feeder market for the UAE, and are increasingly being targeted by tourism authorities in Abu Dhabi and Dubai.

On Saudi National Day, Dubai projected the Saudi flag on the Burj Khalifa skyscraper, while Abu Dhabi held the “Roads of Arabia” exhibition at the Louvre.

“The Dubai Shopping Festival is now (in full swing), and this coincides with a major holiday in Saudi, which is well-timed and a strong motivator for Saudi travellers,” Ahussain said.

Global online travel company Cleartrip said that its Saudi travel bookings are growing at more than 12 percent year-on-year, largely driven by growth in domestic air traffic, with increased capacity by new airlines such as flyadeal, SaudiGulf and Flynas.

“Local domestic demand has been growing rapidly due to the price deregulation introduced a few years ago,” said Sameer Bagul, managing director and executive vice president of Cleartrip Middle East.

“As per our estimates, over 25 percent of domestic travel bookings are made online, and the online market is growing at over 30 percent yearly.”

While Arab Gulf states remain some of the most popular destinations for Saudis, Milan, Paris, London, Malaysia and Thailand remain high on their agenda.

“Meanwhile, Turkey remains an all-time favorite for Saudis, and with the recent depreciation of the Turkish lira, travel from the Kingdom to Turkey is on the rise.”

Family travel makes up about 70 percent of total outbound trips from Saudi Arabia, in contrast to the global average that stands at

30 percent. The trend of a fairly high ratio of family-oriented travel is seen as unique to the Kingdom.

“Family and multigenerational travel is a rapidly expanding segment within the global tourism industry,” said Christopher Lund, head of hotels for Colliers International in the MENA region.

“We expect this trend to continue, and hotels to become more accustomed to their needs and preferences.”

Bahrain and the UAE are considered the most visited destinations by Saudis, followed by Jordan, Kuwait, Egypt and London, according to Lund.

“Hotels, for many years, have catered to regional markets such as Saudi Arabia. Given the large family-oriented travel by the Saudi outbound market, hotels in the UAE tend to have larger rooms, children’s areas and kitchenettes,” he said.

“In recent times, some hotel brands such as Shaza and Majlis Grand Mercure have been designed specifically to cater to regional demand, and high-profile attractions such as the Louvre Abu Dhabi and Warner Bros. on Yas Island are being promoted to draw more tourists.”

According to SMErush, an online digital marketing suite, Saudis’ online search engine keyword patterns and trends for outbound holiday travel initially demonstrated slow growth in interest in some of the newer tourist hotspots such as Sarajevo and Tbilisi.

“It’s quite clear that the vast majority of Saudi’s Arabic-speaking public are stable in their holiday online search patterns,” said Adam Zeidan, SEMrush’s corporate communications manager for the MENA region.

“Each year there is no major change in destinations, with the most popular searches including Arab-friendly and family-friendly holiday destinations in the Middle East and the Far East.”

The Internet and new technologies are opening up opportunities to explore more destinations, access attractive packages and ease the travel process, encouraging Saudis to holiday more.

“Malaysia, Singapore, Turkey and Europe are among the most visited by Saudis,” said Fadi Ammache, general manager of the Millennium Plaza Hotel Dubai.

“However, Dubai remains on top of those destinations due to the short travel time, several flights per day, world-class attractions such as malls, waterparks and Burj Khalifa, and high-level services provided by all sectors.”

Vinayak Mahtani, CEO of bnbme, a holiday home management company, said that Saudis will continue to travel more to the UAE as they feel “more comfortable” there than in the US or Europe.

“Generally, the atmosphere for them may not be so inviting, whereas Dubai will make them feel at home,” he said.

The Kingdom itself has increasingly been focusing on investments in travel and tourism, as its Vision 2030 reform plan aims to diversify sources of income and reduce reliance on oil.

As part of its efforts to boost domestic and inbound tourism, the Kingdom has planned mega-projects such as the $500 billion Red Sea coastline project, the Neom megacity, the entertainment, sports and cultural destination Qiddiya, and the luxury destination Amaala.

“These ambitious projects aim not only to capture demand from Saudis, but also to attract inbound tourism,” Bagul said.

Ahussain said: “The impact of these investments on travel is yet to be seen, but we believe there will be an overall positive trend for the travel industry in the Kingdom, boosted by the promotion of domestic travel and staycations around events in the Kingdom, as well as potential increased inbound tourism to Saudi in line with major events such as the recent Formula E Racing event in Riyadh.”

The outbound travel sector is expected to continue growing “because Saudis, particularly millennials, are known for their interest in travelling and exploring new destinations,” he said. “Millennials will make up more than

30 percent of our customer base in the next five years.”

According to the Arabian Travel Market, the Saudi hospitality sector is set to grow 13.5 percent per year to 2022, higher than the established markets of Oman at 11.8 percent and the UAE at

“The balance could shift to increased weekend local tourism if more world-class family entertainment sites and events were to operate year round in the Kingdom,” Zeidan said.

Richie Santosdiaz, an economic development expert in the UAE and adviser for Pax Tecum Global Consulting, said Saudi Arabia’s economic transformation will have a huge impact on tourism.

“The focus has been on the long term,” he said. “This means not only boosting international tourists coming to Saudi, but also the Saudi population — those looking for short or long weekends — exploring more of their country.”