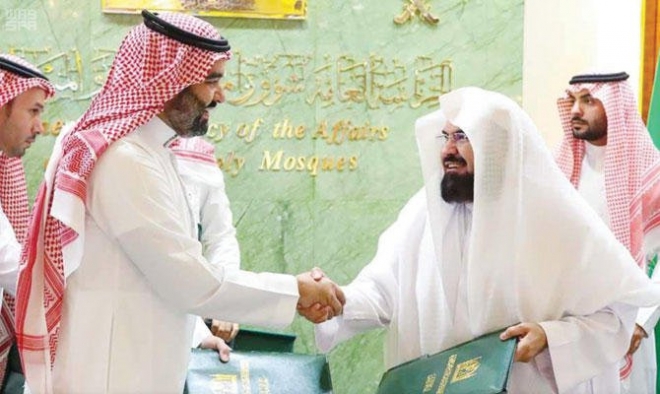 JEDDAH: The General Presidency of the Grand Mosque and the Prophet’s Mosque on Sunday signed a cooperation agreement with the Saudi Ministry of Communications and Information Technology to upgrade technical and digital services at the mosques.

The signing ceremony was attended by the president of the General Presidency for the Affairs of the Two Holy Mosques, Sheikh Dr. Abdulrahman bin Abdul Aziz Al-Sudais, and the minister of communications and information technology, Abdullah bin Amer Al-Swaha.

The agreement aims to create a strong partnership with a view to developing the digital infrastructure, creating an e-business environment and boosting emerging technologies such as artificial intelligence, the Internet of Things and augmented reality.

It is the most important agreement signed by the presidency, and is a turning point for visitors of the Two Holy Mosques, Al-Sudais said.

Attendees of the signing ceremony watched a documentary about the services provided by the presidency for the last 56 years. Al-Swaha said his ministry seeks through the agreement to activate and support technology and digital transformation to serve pilgrims.

“The infrastructure in the Two Holy Mosques is among the best globally,” he added. “In the previous Hajj season, we launched the Smart Hajj campaign across a number of apps, most notably the Soha app, which enables pilgrims to access the services of a physician anywhere at the holy sites.”

The agreement will establish an institutional framework, transfer knowledge and innovation, and contribute to raising the efficiency of employees and the system, he said.


⇐ Previous:
‘How to set an example’ initiatives promote social responsibility among pilgrims
Next: ⇒
Jabal Omar to establish Islamic museum in Makkah