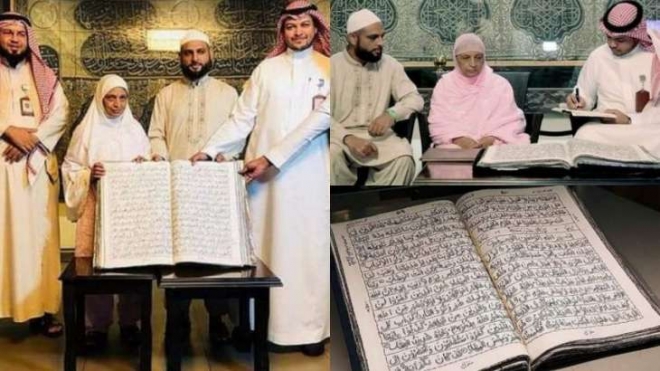 MADINAH, (UrduPoint / Pakistan Point News - APP - 8th Apr, 2019 ) :A handwritten and embroidered Quran, which took a woman 32 years to make, is among the works being displayed at The Holy Quran Exhibition Centre, here.

The woman, 63-year-old Nasim Akhtar of Pakistan, presented the Quran to the centre on Sept 21 last year to be exhibited.

"Nasim started the process of writing and the embroidery of the Quran in August 1987 when she was 30 years old, and completed it in January 2018," said the centre's communication officer, Ahmad Zaki Amin.

"The first 15 years were spent writing the Quran while it took 17 years after that to do the embroidery.

"The 10-volume Quran weighs 55 kilograms, with 3 juz' (parts of Quran verses) per volume," said Ahmad to Bernama on Sunday, here.

Zaki added that the creation of the Quran involved 300 metres of fabric and 25,000 metres of threads.

Those visiting Madinah can view Nasim's work at the centre, situated beside the Nabawi Mosque.

The centre, open from 9am till 9pm, displays information on the history of the Quran and the Saudi government's effort at preserving the holiness and the greatness of the religious text.