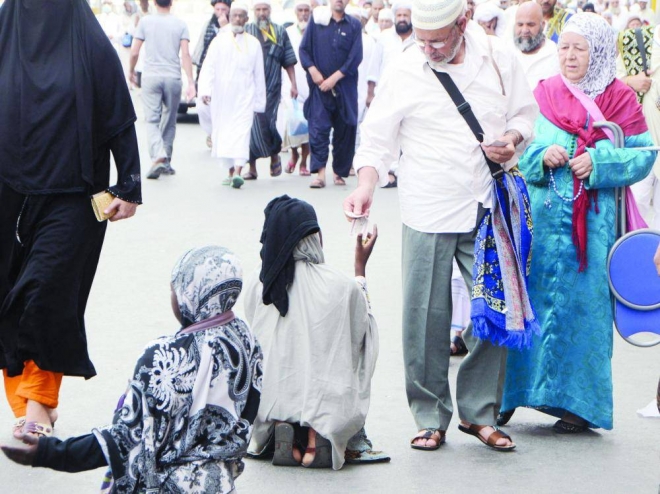 DAMMAM — As many as 2,710 Saudi men and women beggars were caught last year by 13 offices to combat begging all over the Kingdom, the Makkah daily reported on Wednesday quoting figures released by the Ministry of Labor and Social Development.

The ministry said the beggars consisted of 570 men and 2,140 women.

Meanwhile, a social worker said a number of beggars would return to begging even after they were caught and made to sign pledges never to go back to the bad habit again.

Fouad Al-Mishaikhis said most of the beggars would go back to begging because the causes that forced them into begging in the first place were still there.

"The phenomenon needs a comprehensive treatment. The beggars should be closely followed up by the concerned authorities to provide them with their minimal needs," he said.

Mishaikhis said some beggars used social media to present video clips showing their dire need for help so that the donors would sympathize with them.

"The beggars also exploit their children showing them in dirty and worn-out clothes so that people may rush to their help," he said.

The social worker said these beggars film their video footages in poor neighborhoods so as to win the sympathy of the philanthropists.

"The beggars do not use their own homes as locations for the films because their houses may look neat and beautiful," he said.

Mishaikhis said some beggars might go as far as offering their kidneys for sale to win over the hearts of donors who may opt to send them money.

"This is totally incorrect. No beggar is would be willing to part with his own kidney. They are doing this deliberately to extort money from the kind-hearted," he said.

The social worker said some beggars, who are not actually needy, might go for begging to make extra money and improve their lifestyle.

"These people are used to getting easy money so they are not willing to give up begging even if they have all their needs and requirements met," he said.

Mishaikhis said some people went begging because they were psychologically imbalanced while others might want to embarrass their families and take revenge on them by begging in the streets.

He said some family heads might force the members of their families especially women and children to beg.