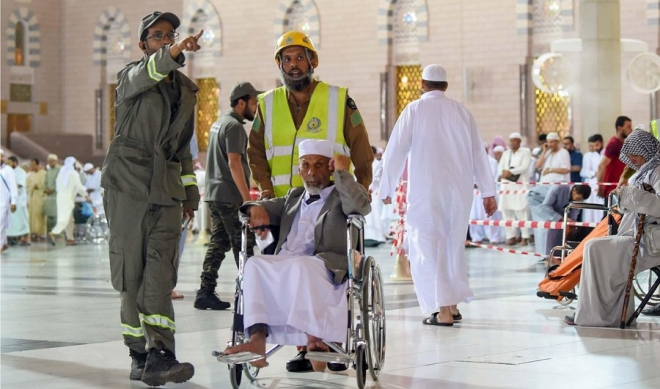 RIYADH: Civil Defense chiefs in Makkah have put in place strict security measures to ensure the safety of pilgrims and Saudi citizens during the month of Ramadan.

An emergency plan, approved by Interior Minister Prince Abdul Aziz bin Saud bin Naif, has been rolled out, with specially trained personnel deployed to deal with any potential threats to safety over the fasting period.

Brig. Abdullah Al-Qurashi, director of Civil Defense in Makkah, said there were 38 fixed civil defense centers, supported by 24 seasonal centers, in addition to 27 intervention points and 30 civil defense posts stationed in The Grand Mosque in Makkah to provide aid and assistance to pilgrims.

He added that rapid intervention teams had been positioned to cover important sites, the central area and densely populated buildings.

“Preventive supervision teams were deployed in markets, malls and holy sites supported by vehicles and technical equipment,” the brigadier said.

Meanwhile, Sheikh Abdulrahman Al-Sudais, president of the General Presidency for the Affairs of the Two Holy Mosques, met Abdulrahman bin Abdullah Abu Dujain, head of the scout camp being used to serve pilgrims in Makkah, and a number of scout volunteers who will be working in The Grand Mosque.

Al-Sudais hailed the efforts of the scouting organization during Ramadan. “The volunteering services offered by the scout members in the Two Holy Mosques have contributed, along with the other efforts exerted by the competent government sectors and entities, to enable visitors to perform their rituals with ease, tranquility and spirituality,” he said.

Abu Dujain thanked Al-Sudais for his encouraging words and highlighted the excellent cooperation between the Saudi scouting association and a number of sectors that has helped to ensure the comfort of pilgrims, visitors and worshippers.

Pilgrims at the Prophet’s Mosque have thanked King Salman for the services provided for them by government agencies in Madinah.

Visitors praised security measures, comfort facilities and the guidance they received during their journeys.

Al-Ibrahimi Yaalu, from Algeria, expressed his joy at visiting the mosque during the holy month of Ramadan, and praised the Saudi government for the services he had encountered since his arrival in the Kingdom.

Yazid Rashid, from Iraq, praised the services in the health centers set up to take care of visitors from around the globe. In addition, he highlighted the organization of the country’s transport and communications links, especially those connecting the nation’s airports to the center of Madinah.

Dr. Fahim Babu, who had traveled from India, stressed that the  good services were the outcome of years of consistent efforts and good planning. Magdy Dabbas, another pilgrim from Jordan, who resides in Jeddah, said that he visited the mosque annually, and that the transport links and assistance on offer improved every year.

There was also high praise for the king, government and local authorities from pilgrims from as far away as Indonesia, Pakistan and Sudan, with many thousands of Muslims traveling from across the world to Saudi Arabia to attend prayers at the mosque during Ramadan.