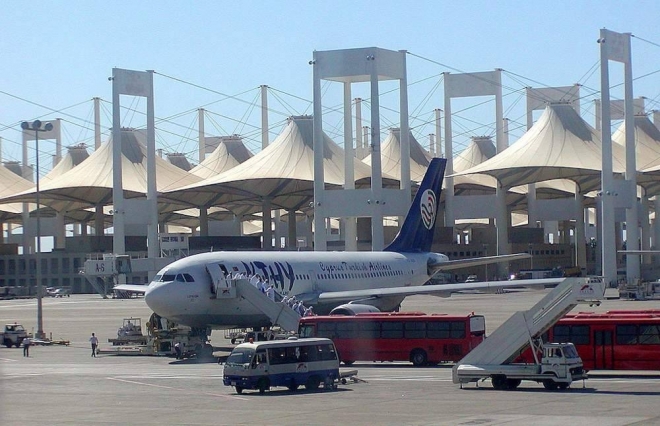 JEDDAH — Pilgrims for the upcoming Haj will start arriving in Saudi Arabia on Thursday, July 4, with the first Haj flight carrying 301 Bangladeshis touching down at King Abdulaziz International Airport (KAIA) in Jeddah.

Essam Fouad, director of KAIA, said the pilgrims would continue to arrive in the Kingdom by air, land and sea until Aug. 5.

He said all services for Umrah pilgrims would come to a halt in 10 days.

The current Umrah season began late October and ended on Monday, June 18. The arrival of Umrah pilgrims will resume in mid-August after the Haj.

More than 7 million Muslims from abroad traveled to the Kingdom since the start of the season for the minor pilgrimage of Umrah, which is performed around the year. The Haj is performed over six days in the Islamic month of Dhul Hijjah (the month of Haj).

Fouad said the emirate of Makkah and the General Authority for Civil Aviation (GACA) were striving to provide the pilgrims with outstanding services to enable them perform their rites in ease, peace and comfort.

He said all the government and private sector establishments involved in the Haj services completed their preparations to receive the pilgrims and make their Haj journey a memorable event.

All arrangements are in place at the Haj Terminal of KAIA to receive the pilgrims, process their passports and group them to go either to Makkah or Madinah.

The huge complex has 14 integrated lounges well equipped to provide the pilgrims with all the required services. They contain special desks for passports, customs, a medical center, a medical team to vaccinate the pilgrims and detect any contagious diseases, a branch of the Ministry of Haj and Umrah, and offices of the United Agents and other utilities.