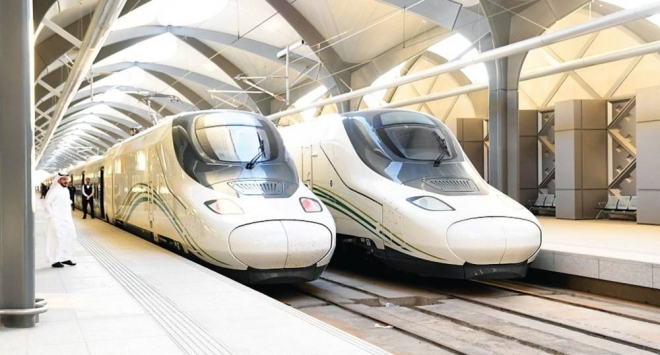 JEDDAH — The over SR60 billion Haramain High Speed Express Train is considered the largest public transport project in the Middle East, according to the acting director of the Public Transport Authority Rumaih Al-Rumaih.

The train is connecting the holy cities of Makkah and Madinah via Jeddah and King Abdullah Economic City in Rabigh.

The project has 35 trains each with a capacity of 417 seats and has five railway stations with the main one in Makkah which is built on an area of 503,000 sq. meters accommodating about 19,500 passengers per hour and is only four km away from the Grand Mosque, Al-Madina Arabic daily quoted Al-Rumaih as saying.

The official explained that the ticket price varies depending on the distance. He said the price between Jeddah and Makkah for the hospitality class is SR40 while it is SR50 for the business class.

He said between Makkah and Madinah the prices start at SR150 and go up to SR250 for the business class.

Rumaih said there are helicopter landing facilities and offices for the Civil Defense.

He said the Madinah station is a work of archeological marvel. It has 19 elevators, 12 escalators and is only 6 km away from the Prophet's Mosque.

The station has a mosque accommodating about 1,000 worshipers, a parking lot for about 1,000 cars and 417 surveillance cameras.

The train transports 3,800 passengers in an hour between Makkah and Madinah and 19,600 between Jeddah and Makah. In a year, it transports about 60 million passengers.


⇐ Previous:
Hectic preparations on for the opening of Jeddah’s new airport
Next: ⇒
Ministry warns against fake Haj establishments