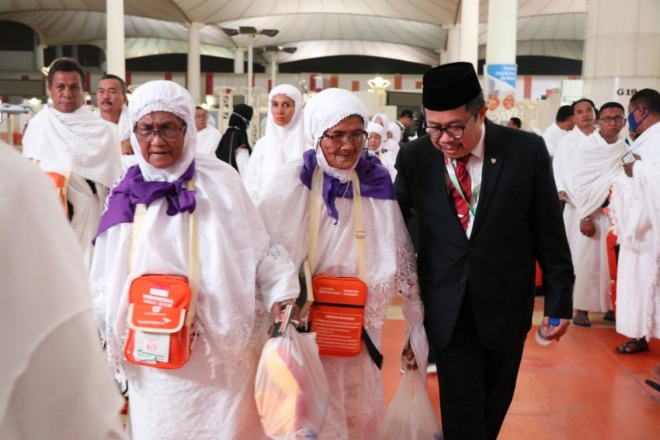 JEDDAH: The second phase of Indonesian Hajj pilgrims started landing in Jeddah with the arrival of a 455-strong contingent from Makasar’s Sultan Hasanuddin International Airport in South Sulawesi.

A ceremony was organized to welcome the pilgrims landing in Jeddah, where they were served an Indonesian breakfast.

As many as 529 Garuda Indonesia and Saudia flights are transporting the pilgrims, 296 of which are carrying a total of 120,500 passengers to Jeddah during the period July 20 to Aug. 6.

More than 800 Hajj personnel and officers from Indonesia Religious Affairs Ministry and 308 health-care professionals from Health Ministry have been deployed to assist the pilgrims.

About 231,000 Indonesian pilgrims are expected to perform Hajj this year, including the additional quota 10,000 granted by King Salman.

The increasing quota of the Indonesian Hajj pilgrims will hopefully cut the waiting list, which is currently 40 years long.

The minister was briefed on the process and procedures of Makkah Route initiative. He expressed his admiration for the initiative and extended thanks and gratitude to Saudi Arabia for its efforts to serve Islam, Muslims, and pilgrims.