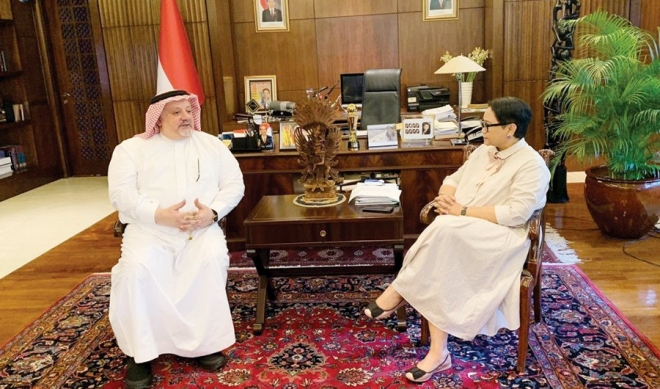 During the meeting, they discussed the relations between the two countries and the latest developments in the Middle East, the Saudi Press Agency reported.

Indonesia is sending the largest number of Hajj pilgrims this year after it received an increase in its Hajj quota to 231,000 pilgrims. This year, more than 800 Hajj personnel and officers from Indonesia’s Religious Affairs Ministry and 308 health care professionals from the Health Ministry have been deployed to assist the pilgrims.

Earlier, Al-Thaqafi said that the implementation of the Makkah Route initiative in Indonesia for the second year confirms the success of cooperation between the two countries’ authorities in serving Indonesian pilgrims traveling to the Kingdom.

Al-Thaqafi expressed his thanks and appreciation to King Salman and Crown Prince Mohammed bin Salman for their care and efforts in serving pilgrims.

The ambassador said: “The initiative was welcomed by officials of the Indonesian government and widely accepted by Indonesians.”

The initiative is expected to serve more than 225,000 pilgrims passing through airports in Malaysia, Indonesia, Pakistan, Bangladesh and Tunisia.

The service includes issuing visas, ensuring compliance with health requirements, and codifying and sorting luggage at airports in pilgrims’ own countries.

This enables them to bypass procedures on arrival in the Kingdom, and to head directly to buses waiting to transport them to their accommodation in Makkah and Madinah.