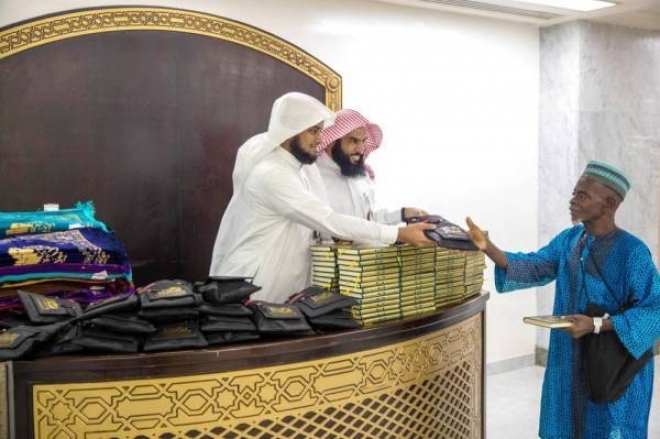 MAKKAH — About 9,000 copies of the Holy Qur'an are being pulled out of the Grand Mosque every day for errors in the text or incomplete pages, according to Khaled Al-Harithy, director of the department of books of the Presidency of the Affairs of the Two Holy Mosques.

He said most of the copies with printing mistakes come from Syria and are brought by pilgrims seeking reward from Almighty Allah by putting them in the shelves in the Grand Mosque.

Harithy said as many as 70 employees and 140 workers work around-the-clock to check the authenticity of the copies of the Qur'an.

"The presidency has provided more than a million copies of the Qur’an printed at King Fahd Qur'an Printing Complex in Madinah which are accredited and stamped by the presidency as wakf (endowment) for the Haram which should not be taken away," he said.

He explained that the copies are kept in about 3,000 shelves which are cleaned outside the Grand Mosque.

Harithy said during the high seasons of Ramadan and the Haj, they receive daily about 100 cartons full of unaccredited copies of the Qur'an. "Each carton contains about 80 to 90 copies," he added.

Harithy said they every day about 1,000 copies of the Qur'an are distributed as gifts to the pilgrims. "Every pilgrim is also given a prayer rug," he added.