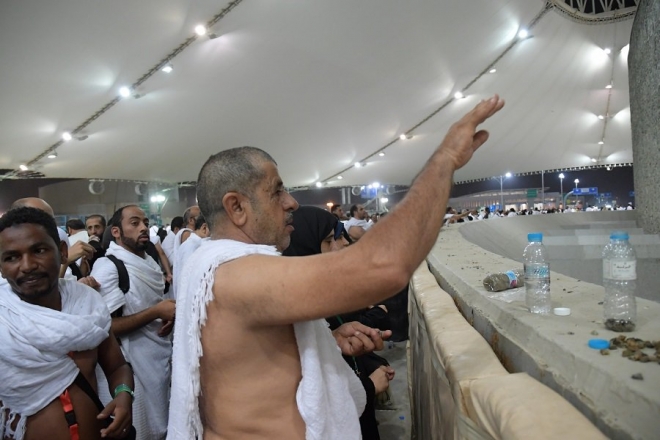 MINA: At the dawn of the first day of Eid al-Adha – the third day of Hajj - hundreds of thousands of Hajj pilgrims walked together to Jamarat Al-Aqaba in Mina.

It is at this site the pilgrims throw seven pebbles at a wall in a ritual that symbolizes the stoning of the devil.

The pilgrimage is attended by Muslims from all countries, irrespective of political views, age or occupation – the belief being that all are equal under God.

Student, Islam Ali, traveled from Sudan to carry out the Hajj pilgrimage. She said she had walked a lot.

“I am really looking forward to seeing the Kaaba, that will be, of course, the most amazing experience during Hajj… I’m surprised by how organized it is in Makkah. Despite the number of people – the officials have done a great job.”

Security at the site are managing the flow of the more than 2 million pilgrims, to ensure that congestion is kept to a minimum.

It was in 2015 when hundreds of pilgrims died in a stampede at Mina – it was the deadliest incident to occur in the last 25 years of the pilgrimage.

Since then the authorities have taken measures to ensure the safe flow through Jamarat Al-Aqaba and onto the Jamarat Bridge where the ritual takes place.

Throughout Hajj, members of Saudi Arabia’s security forces and civil defense volunteers have been working to ensure the safety of the more than 2 million pilgrims at all sites.

They hand out water, act as quick response teams helping those who struggle with the walking and heat and they guide pilgrims, ensuring the safe flow of people through the various crowded spaces, some of which involve narrow roads.

Civil defense volunteer, Essam Al-Moalami said: “It's been great, I feel so proud to help these people and to serve my country. It's the second year in row that I have done this and I hope to do it next year too.”

Members of Saudi Arabia's security forces get ready for the millions pilgrims passing through Jamarat Al-Aqaba in Mina. (AN Photo/Huda Bashatah)

“It’s so well organized, Hajj has been great,” said Lana Haroun from Jordan.

HUndreds of thousands of pilgrims spill out onto the tent-lined streets of the massive tent city in the Mina valley. (AN Photo/Essam Al-Ghalib)

All the pilgrims had spent the previous night resting in a sprawling city of tents that filled the Mina valley – at day break as the pilgrims woke, hundreds of thousands of people filled the streets.

Pharmacist, Hassan Mustapha Ali, from Jordan had previously only ever watched the pilgrimage on television.

“It’s my first time and it's been amazing we used to watch Hajj on TV so it's an incredible feeling to have the opportunity to fulfil this Islamic obligation.”On day two of Hajj the pilgrims had gone to Mount Arafat, but some people were turned away because it was so busy.

There are three pillars at the site – only one was open on Sunday – the other two will be opened for the ceremony over the following two days.

Arab News reporter @Ruaa_Alameri is at Jamarat Al-Aqaba where more than 2 million pilgrims will take part in a ritual symbolizing the stoning of the devil – it’s a small area so Saudi security forces are essential to ensuring the safety of the pilgrims https://t.co/PGb2ftSH9p pic.twitter.com/2M11q4uSMn


⇐ Previous:
A matchless spiritual experience
Next: ⇒
More than 327 million meals and bottles of water distributed among pilgrims