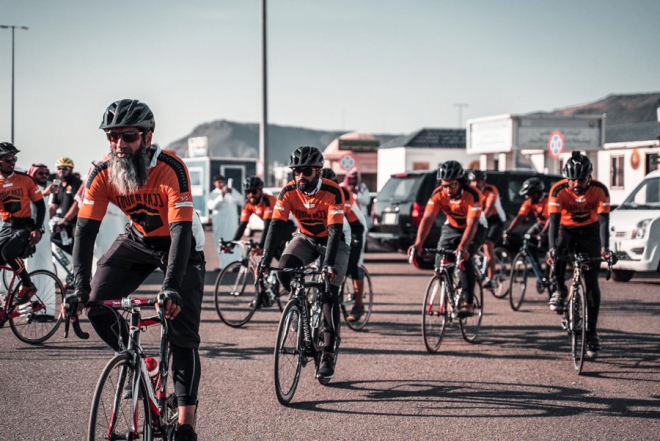 MINA: As if the trials of the Hajj weren’t physically taxing enough, one brave group of cyclists from London decided to cycle their way to the city of Makkah to perform the pilgrimage, pushing themselves to their limit to make the journey.

Led by Tahir Akhtar, the “Tour de Hajj” team not only managed to complete their ride to Makkah to make it in time, but also managed to pass by Madinah and offer prayers at the Masjid Al-Nabawi (the Prophet’s Mosque) as well.

The goal of their journey was to raise funds for charity to build wells, schools and mosques in countries such as Pakistan, South Africa and Uganda. The group managed to raise £55,378 pounds ($66,927) by the time they reached Makkah.

The group consisted of 8 cyclists and their support driver, taking 58 days via 17 different countries on their journey. They left London on June 7, offering Jummah (Friday prayers) at the East London Mosque before setting off.

HIGHLIGHTS Led by Tahir Akhtar, the ‘Tour de Hajj’ team not only managed to complete their ride to Makkah to make it in time, but also managed to pass by Madinah and offer prayers at the Prophet’s Mosque as well. The group consisted of 8 cyclists and their support driver, taking 58 days via 17 different countries on their journey. They left London on June 7, offering Friday prayers at the East London Mosque before setting off.

Arab News caught up with three of the riders in Makkah on the first day of Eid Al-Adha.

Support driver Israr Hussein, the only member of the team who had previously performed Hajj, was on hand to help the drivers with the journey as well as to guide them through the rites of Hajj.

“I’m just a normal delivery driver in my day job. Junaid inspired me with his vision of creating five modern villages in four different countries and helping the poor. The villages consist of a mosque, a school, and provide the locals with solar panels and water beds. When he told me about it, I was ready to come on board straight away,” he said.

“The Hajj journey was amazing. I did Hajj in 2014 already, so this Hajj was for my grandfather who has passed away.”

The “Tour de Hajj” team’s goal is to raise funds for the charity to build wells, schools and mosques in countries such as Pakistan, South Africa and Uganda. (Photos/Supplied)

Another rider, Junaid Afzal, was inspired by the previous efforts of a group in 2017 who also cycled to the holy city. “I thought about it constantly for two or three months, and I said to myself ‘if this is the first thing I think about when I wake up, I’m gonna try my best to make it happen’ and today we have completed our Hajj,” he said.

Despite not being a cyclist before he decided to undertake the journey, he said he did his best to prepare beforehand. However, Afzal said that there was always going to be unexpected setbacks and risks on the road: “It is like an exam, you can never be too prepared. So we didn’t know what to expect. Also, Ramadan happened in the middle of our training, so that was difficult. But we went from a hundred miles a week to our actual cycling goal which was four to five hundred miles a week. You can’t really train for that.”

Afzal said that the best part of the journey for him was “seeing the miracles of God in front of our eyes.” The most difficult thing was leaving his family behind in London. “The day that we cycled off, before we went I looked around me and I saw my family and they were literally on the verge of tears. So I just looked forward and never looked back, and that was one of the toughest things I’ve ever done in my life.”

The Hajj itself was also difficult for the team, who had arrived in Makkah already exhausted after the extensive travel and exercise. “I thought by the end of the journey that Hajj would be no problem, but walking and cycling are two different things. It’s really tough.”

As for advice, Afzal had this to say: “The best piece of advice I can give is that people should aspire to not just make a living, they should aspire to make a change in life. Don’t waste your time, and do great things and leave a legacy. No one remembers the richest man in the world, but they will remember the man that changed the world.”