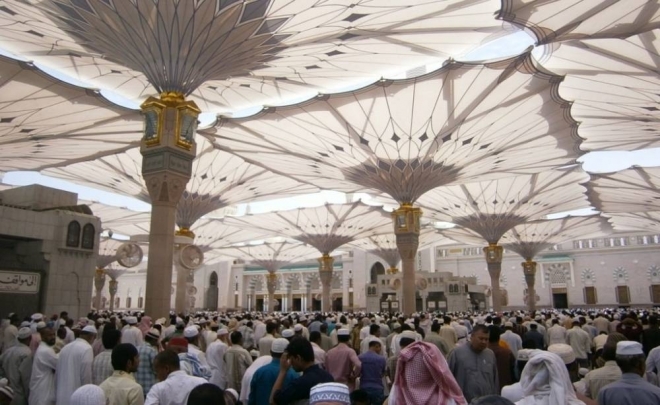 MADINAH — More than 250,000 pilgrims offered the second Jumaa (Friday noon) prayers after the Haj at the Prophet's Mosque in Madinah amid integrated services provided by the government of the Custodian of the Two Holy Mosques for the Guests of Allah.

Madinah Emir, Prince Faisal Bin Salman and his deputy Prince Saud Bin Khaled Al-Faisal gave standing instructions and personally followed up the comfort of the pilgrims who arrived in Madinah to pay homage to Prophet Muhammad (peace be upon him) and pray at his mosque.

The visitors performed their Friday prayers in an atmosphere of complete serenity, peacefulness and comfort.

The central area around the Prophet's Mosque was crowded with congregates who came early so as to find places inside the mosque and listen to the sermon.

The Presidency for the Affairs of the Two Holy Mosques has worked full force to prepare the mosque for the prayers including cleanliness, maintenance, cool Zamzam water and other services.

The presidency has doubled the number of workers supplying them with enough tools to do their jobs perfectly.

It has also prepared the roof and the plazas to accommodate more congregates.

The security forces, health authorities, Red Crescent Authority, traffic police and many other concerned government and private bodies were all present at the plazas to organize entry and exiting of the worshipers into and from the mosque.