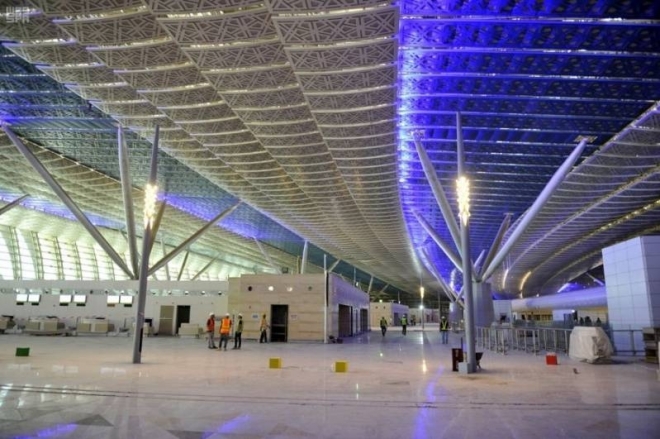 Currently, the number of flights has been increased by adding 13 new international stations, bringing the total to 27. The number of departing and arriving flights at the airport has reached 4,900 with 654,000 passengers on board, Al-Ruasa said.

He further said that over 2.5 million passengers have been transported on board 30,000 flights since the beginning of operation of Terminal One at the airport in May 2018.

Al-Ruasa confirmed that the private sector would operate Terminal One soon in the new airport, within GACA’s endeavor to carry out the privatization strategy.

He added that there is a plan to this effect, to raise the operation capacity of the airport and improve the passenger’s experience.

As to the many complaints by the new airport users about the SR10 per hour parking fee, which they deemed high, especially since parking fee at the old airport was just SR3 per hour, Al-Ruasa said that there is a 50 percent discount if the fee is paid via the self-service machines.

Hence, the fee will be SR5 per hour or part of it if paid via the machines. Al-Ruasa urged airport users to avail of the technology in the airport, amid the keenness to facilitate traffic flow in the parking lots.

As to the bridges on unfinished roads, linking the main roads with the new airport, Al-Ruasa said there were three remaining bridges, as the Makarona Road Bridge has been completed. Completion of construction works of the security checkpoint is awaited and it is expected to be ready by Jan. 10, 2020.

As regards Prince Miteb Road (formerly known as Al-Arbaeen), it clashes with the nursery in King Abdulaziz International Airport. Work is going on at present to complete the new nursery for the airport.

This will enable the airport authorities to demolish the existing nursery and complete the road works. What remains is the bridge at the intersection with the extension of Al-Amal Road.

Till date Saudi Arabian Airlines (Saudia) is the sole carrier via the new airport, as its affiliate, the Ground Services Company, has employed 200 people in the first stage and subsequent batches will be employed in future.

The SR1 billion contract for ground services has been signed with Flynas to provide ground handling services with the airline.