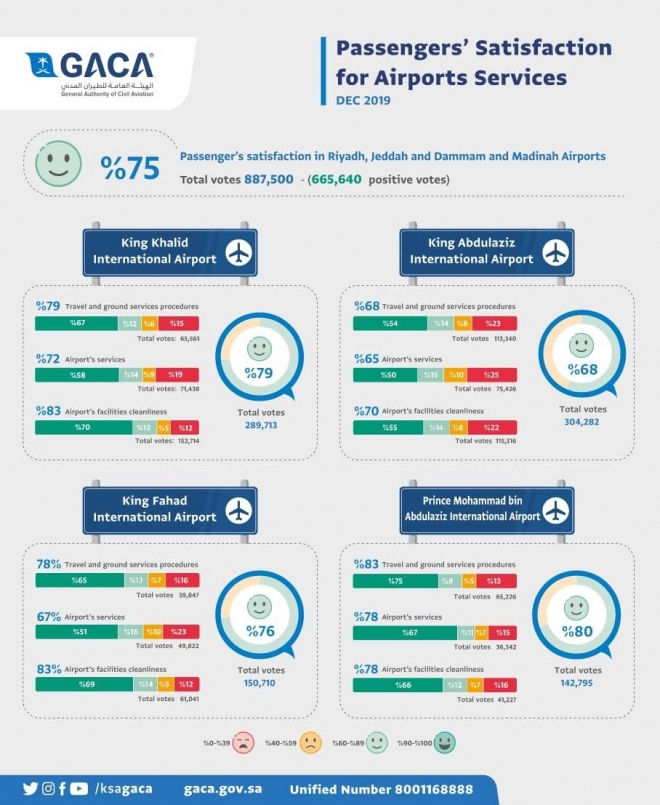 The overall satisfaction rate of passengers satisfaction reached 75%, which is the same as last November’s ratio, revealed General Authority of Civil Aviation (GACA) statistics for the month of December.

GACA announced its monthly passengers satisfaction report for the month of December, 2019, in which more than 800,000 passengers participated in the survey.

GACA, represented by the General Administration for Quality and Customer Protection, conducts field trips periodically at the mentioned airports, preparing reports on the level of customer satisfaction and their observations on the services provided.

The aim is to assess the current level of services, and analyze the information received through opinion polls carried out by the team. The tools used in the evaluation is highly reliable, in an effort to improve and develop those services provided to traveling public around the Kingdom's airports.

GACA issues monthly reports on the level of travelers ’satisfaction with the services provided in airports around the Kingdom, with the aim of assessing the current level of services and persevering and improving them by applying the highest international standards in passenger services quality.